Looks like I might have found a place to volunteer some GIS and GPS skills in Alabama. I've signed up for a training this Friday so I'm hoping there will be space for an out of towner. The form said you have to be willing to monitor the coast at least 2x/week for at least 2 weeks of at least one month. I can do that! I would hope to do more than 2x/week, but I'm guessing there might be limited GPS unit availability. But perhaps I can help other teams since I know the software very well.

I have my fingers crossed!

Last week Blake and I took a bit of a Southern (Coastal) Cities Tour. We went from Atlanta to Savannah to Cumberland Island to Charleston to Asheville back to north Georgia ... in 5 days. If you knew us back in the Georgia days, then you probably know we hit a few of these cities as teens, in typical whirlwind fashion. This time was a little different because we did not sleep in the car or in a Waffle House or on a beach as we did as teens. Instead we camped or hosteled, which was barely a step up considering how insanely hot it was along the coast. Asheville was a much needed respite by Friday. 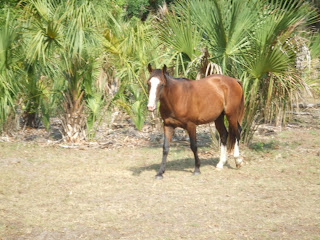 Our trip to Cumberland Island was HOT and yet very worth it. We saw the feral horses, a baby coachwhip (snake), armadillos, lizards galore, fish in the sea, vultures, laughing gulls (hilarious), other shore birds, and more. The stallion to the right gave us a start when he charged behind us to reunite with his herd. I swear we kept our distance but he was perturbed by our presence between himself and the others. 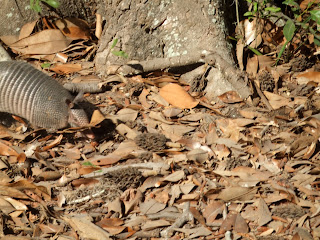 We heard the effects of the recession in the preponderance of southern voices in the campground. I broke the Compact in New Orleans to buy a shirt with a distorted BP logo below the letters "FUBP". While wearing this shirt in the Cumberland shower area I obscured those letters with a handkerchief, inspiring a woman to call me out: "You're brave to wear that shirt".
"Why", I asked, completely unaware that she couldn't see the "FUBP", thus assuming she didn't like the intimation of swearing around her daughter, whom I'd been chatting with about the beach.
Nope, this lady took issue with me supporting BP in "this pristine place". Oh! I whipped away the handkerchief and we both laughed in solidarity. It was really funny. I admired this lady for speaking her mind when she thought I was trying to have BP's back. How backward would it have been to see a BP logo trotted out to Cumberland (which I would not call pristine in any sense but admit is a treasure)? It was also just hilarious to be momentarily mistaken for an oil giant advocate.

Did I mention how hot it was in South Georgia? Crap it was hot. Driving away from Cumberland we crossed the zillion rivers draining the piedmont and plain, rolling over bridges nearly every mile with marshy swamps below the highway. It's a beautiful, bug ridden place. Looking east as we headed back toward Savannah I caught sight of an alligator basking on a sandy spit into one of those many rivers. First wild 'gator I've ever seen. I wasn't sad to have been in the car at that moment.

In Charleston that night we crashed at a place called the "notso hostel". I'm not going to validate that name ... I was unimpressed. That said, we got some delicious vegetarian food and the server hooked us up with some burn gel to soothe our sunburns since there wasn't a drug store in the neighborhood. So sweet. We sweat through a third night and headed to Asheville early the next morning. Oh, but not before we got our first good cup of coffee in days and this ridiculously delicious biscuity-scone-shaped breakfast bite stuffed with sundried tomatoes and pesto. I want more.

In Asheville we found an amazing co-op grocery store where we stocked up on food and sat down for lunch in some shade. It wasn't hot as hell in Asheville! Hurray for mountains. Our destination was not the city, though. After lunch we dashed another 30 minutes northwest of the city to Long  Branch Environmental Education Center, where we stayed the night. A few months ago I was in touch with Paul, who runs Long Branch, about doing an internship there. I'm still interested so we wanted to see the place in person. Blake and I took a self guided tour through the planted areas, the trout pond, the camping platforms, and a long hike up to Chestnut Gap. It's a beautiful place. We picked blueberries galore and helped weed the plants as Paul quizzed me about particular weeds. That's one of my favorite games (Name That Plant) so I was in heaven. We finally got a cool night's sleep too!

Now I'm back in North Georgia at my parent's place, tending elderly animals, applying for jobs and volunteer stuff in the Gulf, and wondering if I should ever go back to San Francisco. For now I have my sights set on Mobile.
Posted by rachel kesel at 11:31 AM 2 comments: