John and I did an interview at the Commonwealth Club in January. Here's a link if you want to check it out.
Posted by rachel kesel at 10:56 AM 3 comments: 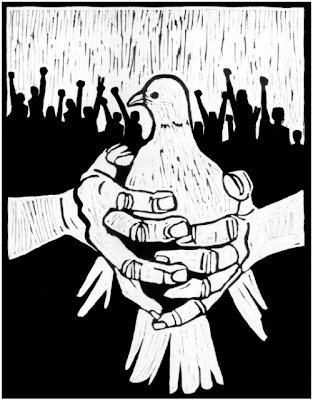 Well, I haven't been at the mall, but I haven't been writing about it either. I spent 3 weeks working 14 hr days and then just kinda collapsed. It was an important job that I enjoyed doing, but I'm still a bit tired a week after it's over.

I even missed the Really Really Free Market this month, which was a total bummer. I've been quite absent at the infoshop as well. I'm not organizing for Earth Day in McLaren Park this year, but will participate with a sustainable dog walking demo.

So what the fuck have I been doing if I haven't been doing this stuff?
Well, I did the world's most intensive house sitting gig for my former employers (who have 9 dogs if you include the foster care crew). I've been wrapping up the outreach phase of my sustainable dog walking project with beautiful poster series and some on site community building.

And I've been organizing for some brilliant actions in March.

Organizing is not the most Compact friendly of activities, in case you're unaware. Even on Earth Day organizing last year, I got really annoyed w/ all the paper pushing. And that was an ecological event, which meant that if during a meeting you lamented the use of excess paper and argued for smaller and only double sided prints, you were heard.

Promoting any event takes loads and loads of paper and ink. And if you're doing the sort of grassroots organizing that I work on, the budgets are super low and you can't afford compostable stickers or recycled paper. Christ it's a conundrum.

Today I pedaled down to SCRAP and got a ton of paper that was once destined for landfill. It's not the best paper in that some of it is hole punched and none of it is super neatly stacked so it will take longer to feed through a printer. But it's cheap as hell ($6 for ~500 sheets of 8.5x11 and ~600 sheets of 11x17) and I feel better about it than using other first run paper.

God knows that movements actually over-utilize online outreach. But it seems that people don't think an event or action is real unless they see it broadcast on paper all across town. So we submit. We drink out of our re-useable coffee cups and leave flyers at the cafe. We pedal around hanging posters on power poles in the rainy season. And I, for one, slap stickers onto every corporate ad I see (won't find me stickering city property, don't want to have to pay for it to be cleaned off).

The message, I believe in wholeheartedly. The means drive me batshit.
Posted by rachel kesel at 8:30 PM 3 comments: