So what happened to the rest of my Summer and Fall?
Long story, but here goes:
When I left San Francisco in July I had just applied to take a civil service test for a gardener position in San Francisco. I've done a lot of work with the Natural Areas Program of Rec and Park. I even came back to SF from London to do my Master's research with the group. 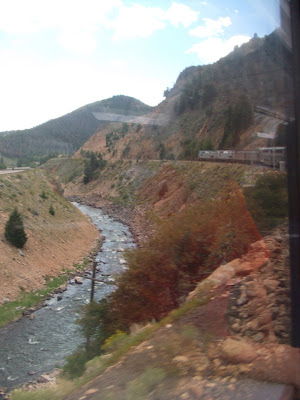 I applied for the test, but went about my summer return to the South knowing that the process could be long or even exclude me. It took a while to find a place that would train me for GIS work in the Gulf ... and as soon as I found one, I learned that I'd get to take the civil service test. So I headed to see some family and catch Amtrak back to San Francisco.

So GIS in Mobile did not happen, unfortunately.

My Amtrak journey was long but enjoyable. I met some amazing folks, including two fun guys who continued to be my friend even after I slammed Starbucks, where it happens one of them has worked for ages. Whoops. Our queer camaraderie lasted from the downed tree on the tracks in an Iowa storm all the way to Salt Lake City, where my new friends departed. At which point I met a fellow geographer headed to Davis for a conference. Davis is very close to San Francisco so this got me through to the end of my journey. I like Amtrak. You should take it some time.

I got back to SF to find that the test was a week later than expected so I took my bike plus a bus or two up to the Russian River to study for a week. It's not like I had anywhere to live in San Francisco, so my escape to fellow Compactors John and Rob's place in Cazadero meant my own bed as much as a place to study. I biked the Russian River as usual. It was a stunning return to California, filled with a lot of confusion about where I actually lived at this point... And about where Blake actually lived (Phoenix, yuck)... and about where our darling cats lived (boarding in a private home).

Soon it was the end of August, test time. I took the test and started a long house sitting job at Pooches' Playtime, where I worked for about 7 years previously. The dogs provided a great distraction from the fact that I had no place to live when the gig was complete ... At which point I moved in with a friend, who also runs a dog boarding facility in her home. I spent 3 weeks at Brandy's as I continued my quest for decent housing for myself and the best cats ever. Somewhere in this time I found out that I did well enough on the civil service test to get on an eligible list. Sometimes it's good news to be on a government list?

It was an excruciating housing search, which I refuse to think about because living it once was enough. I'm pretty sure I'll never use craigslist again because every time I see the blue and purple's of those pages I feel panicked! In October I found a decent but very very loud room. The cats and I moved in but got an amazing offer just two days later so we moved out. I forfeited the month's rent and apologized profusely to the two housemates at the first place. 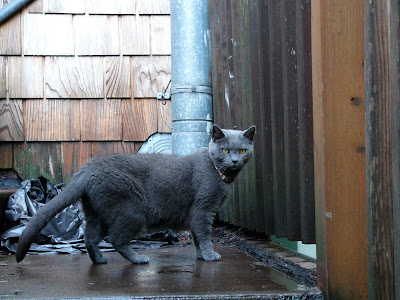 I have very happily landed in an amazing home in Bernal Heights. A few days after moving in, I knew something was wrong with Quivus, my 12 year old cat. Cancer, the terminal kind no matter what you do ... even though I caught it early. Crushing.

I had a few weeks to adjust to this news before I was asked to apply for a gardener's position for the Recreation and Parks Department, which I did. Then the hardcore fretting began: Will I get an interview? Thank goodness I had the dog walking to distract me, and a new house to clean up, and my sweet cats.

Long story short, I got an interview. This caused me to drag my nonconformist body to Macy's, where I bought brand new, fancy clothes for the first time in forever. I absolutely hated the entire experience. I think it might have been worse than the actual interview. The awful Christmas music really put it over the top. (I love good Christmas music, btw.)

I did well enough at the interview and yesterday was my first day as a full time staff member for the Natural Areas Program. It's too exciting to really describe, but suffice to say that I've wanted this for a long time. I signed the paperwork on my 30th birthday (which lead to me mis-dating a slew of signatures). Ending an 18 month job search with the job I've wanted most all along is quite rewarding. Spending my first day installing new plants with dedicated volunteers in the Oak Woodlands of Golden Gate Park was great fun. Preparing a presentation on GIS stuff for Friday was somehow more fun than when I was trying to do it for a contract. Even when the office computer turned off in the middle of my work, I was less than frustrated. I'm thinking that tolerance of machine failure will wear off quickly, but I hope the excitement and enthusiasm stick.

Though the oncologist thought Quivus would be gone by now, she's still enjoying life. She's got several channels of "bird TV", which are actually windows with birds outside. And she goes outside with me daily. I know I'm going to lose her soon, but I'm grateful that she's here to share my joy right now. I'll admit, I've ditched the Compact where it concerns Quivus. I've bought her two new beds (one was made of recycled soda bottles if that's any consolation), countless toys, catnip seeds, and anything else I've thought might bring her joy.

But I'm keeping it real with Christmas. No gifting as usual. Luckily my family and friends still get my aversion to gifting, so it's easy to abstain. Plus, I've got so much now, how could I ask for anything?
Posted by rachel kesel at 8:19 AM 4 comments: