Blake and I got to Georgia on Wednesday night after a few days on Amtrak. I like Amtrak so much better than flying. So much.
Now I'm chilling in north Georgia at my parents' house. Well, chilling is probably an overstatement, though after Phoenix, Georgia is a relief. The frequent thunderstorms have cooled the air and provided some stellar clouds. So welcome after too many months with San Francisco's monotonous blanket of grey or blue, not much in between. 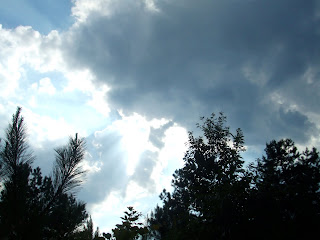 I've been on the phone/email all morning, still trying to find a way to volunteer in the Gulf. I'm not having much luck as of yet. I understand why organizations are reluctant to engage volunteers from out of town. I still hope that my skills and month-long, full time availability will make it worthwhile for some group.

Tomorrow Blake and I are heading to Savannah to do some camping on Cumberland Island. Coast to coast!

Until then, here are some pictures from Georgia. I've been doing a survey of butterflies, birds, and plants on my parent's place, which is 5 acres in northwest Georgia. My dad and I also went for a hike at his hunting club in Pickens County, which is northeast of our place in Bartow. Enjoy. 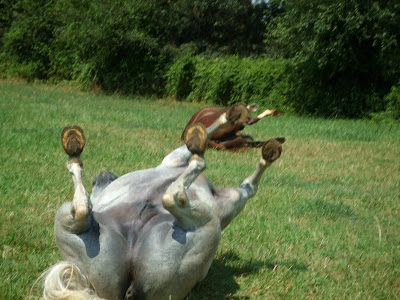 We've been hosing down the horses (Pepsi the grey, Sam the chestnut) at the hottest part of the day. They always take a good roll after. 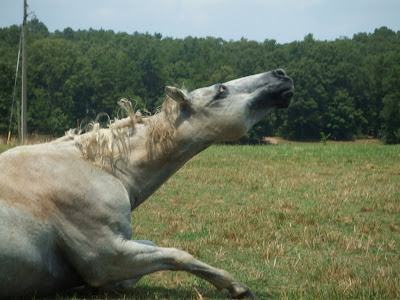 Pepsi likes a good belly scratch when he rolls. 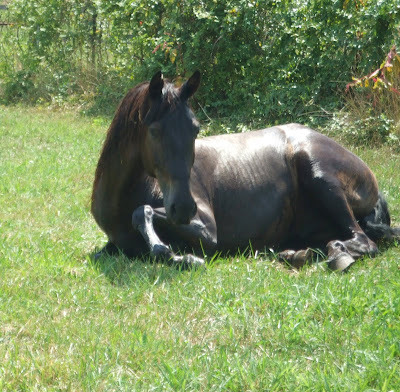 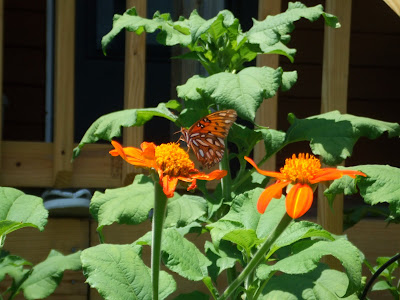 I believe this is a common fritillary in front of my parents' house. 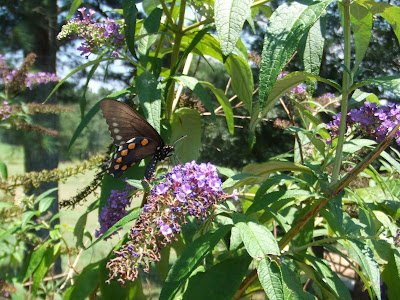 I think this on is a pipevine swallowtail out the back of my parents' house. 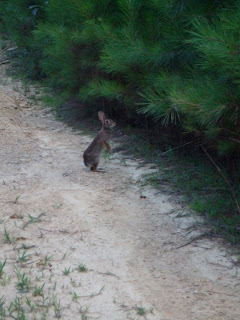 Here are some pictures from Amtrak in Texas and today in New Orleans, where we're stopped for the night. 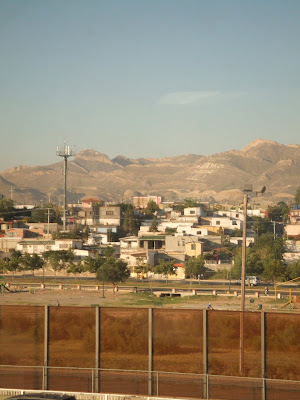 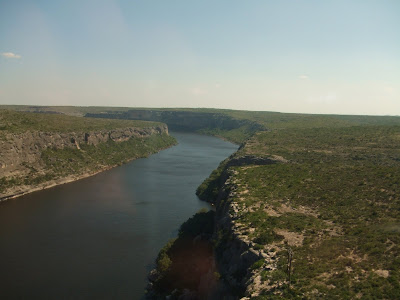 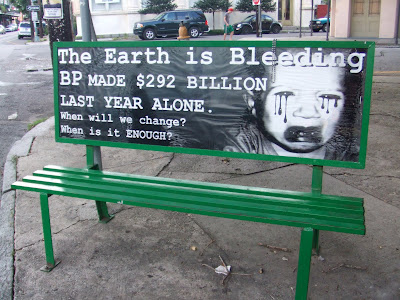 We did it. We moved. So glad it's over.
Now Blake and I are in Phoenix ... the summertime epicenter of unsustainable development. But wait, it's too hot to talk about how hot it is here. So I'll back up.

We got rid of a ton of stuff before we moved, mostly thanks to Freecycle. We moved my remaining stuff to a friend's garage and packed Blake's up for a long drive. After a not-so-final show down with our landlord, his wife, the property manager + assistant, we left SF in a giant truck around 10:30 am on Thursday.

Phoenix is too far for us to do in a day so we were bound for Joshua Tree instead. I love it there. It's incredible and restorative. It's also beyond the smog belt that molests everything east of LA to the Sierra. We got there well after dark, pulling into the south entrance to grab a spot at Cottonwood Springs for the night. After so much city living, the stars were a welcome change. Yeah, it was hot, but Joshua Tree is high enough to be cool at night, so we slept with the tent flaps open until the sun started peaking over the boulders at 6AM the next morning.

I woke up first, eager for a hike before the sun became oppressive. Blake surprised me by getting up with me, if a bit more slowly. I think after days of moving and driving we had lost a few brain cells. We couldn't decide on a trail head. I was staring off at a sign as we meandered across a freshly paved road, pitch black and reflecting morning heat back up at us. Thankfully paying attention, Blake grabbed my arm as I was about two paces from the face of a sizable snake (perhaps 80cm) who was crossing the road, head raised. I backed up, and kept backing, the old snake phobia taking over. We later decided the snake was likely a California Lyre, which was colored darkly grey with a dark head and patterned dorsal.

In San Francisco I've learned that I can use a camera to calm my fear of snakes by turning the encounter into an inquiry. So I headed back to the truck to get my camera. Unfortunately the damn thing was not working ... "zoom error". Without a camera, I suggested a different trailhead for the hike, trying to shake my fear. So we went to the Cottonwood Springs trailhead to do the Mastadon Loop. About 10 minutes into the hike we saw a small Rosy Boa (30 cm) crossing the trail, this time from a comfortable distance of about 3 meters.

We also saw desert hares, chipmunks, at least 5 species of lizard, quail, and other birds along the trail. The sun was climbing higher, our water was reaching the halfway point and we began our return trip with determined strides. Trudging through a sandy wash with about 25 minutes to go, we came to a narrow, shrub-lined pass. It didn't look inviting but there were rocks lined to the right, indicating that the trail (something easily lost in desert landscapes) did indeed proceed into that narrow line. I lead us briskly toward the vegetation where a rattlesnake lurched away to my left, shaking his creepy, aggressive warning as he coiled defensively. As soon as I saw the movement I backed well past Blake, who stayed more calm even during the prolonged rattling.

I needed another way through the trail, though Blake thought we could pass since we could hear the snake rattling and knew its position. No way. Not me. Luckily, we found a sparsely vegetation route around a set of boulders to get beyond the snake and back to the trail quickly. We stopped in the first shade because I really thought I might puke. Adrenaline is a funny thing. I couldn't really afford to get sick or dwell, it was getting hot out there. So we chilled out, and kept going, now with Blake in front and me frequently startling at the abundant trailside lizards.

I went into loud hiker mode, announcing our steps to wildlife with cheery phrases like: "We're coming and we love lizards." "Birds are amazing." "We like your home and we don't litter". Back at the camp I washed my face and arms with already hot water from a pump. Though the visitor's center offered no cold beverages, I found some relief in looking through the ranger's books to identify the snakes, which is how we came up with the Black Lyre, Rosy Boa, and possibly a Southwestern Speckeled Rattlesnake. Blake got a better look at the rattler and thought that one fit best. After looking up their ranges and habitat preferences in Joshua Tree, I think it's just as likely to have been a Western Diamondback, whichi likes thick vegetation and is common in the southern section of the park. Whatever, it was a Crotalus of some sort, made clear by that creepy rattle.

I wish I had pictures to share, but the camera was useless until yesterday. In Phoenix we went to a camera shop where I was told it would cost as much to fix the lens as to get a new point and shoot. I looked at a new, better camera, something I've wanted for a while. I couldn't bring myself to buy it though, so was we waited for a bus I tried my own version of camera repair. Certain that the lens was just out of place, I softly banged the little camera on the bus kiosk until the 'zoom error' was resolved. That's right, I fixed my camera by hitting it. I don't recommend you try it but in this case it worked. The little, internal periscope is working again and I have my point and shoot again!

I still haven't taken any pictures because Phoenix isn't all that photogenic. So far it seems like one massive strip mall/surface street parking lot after another. The best part of yesterday was a break Blake and I took from our long walk to the camerashop. We saw a ridiculous fountains tossing 3 streams of precious water into the baking air above a shallow pool. This was at a seemingly empty apartment complex so we took off our shoes and lounged with our feet in the fountain, trying to recover from obnoxious hangovers. Hangovers in the desert are so much worse.

We're leaving Phoenix tonight on Amtrak bound for New Orleans. We've got to sleep on the train for the next two nights, which won't be fun. Nonetheless I'm looking forward to the journey. We'll spend the entire day tomorrow crossing the east-west breadth of Texas. We've got some movies to watch. We've got a need to catch up on lost sleep. I anticipate lethargy. I'll take it over another mind numbing walk through desolate Phoenix parking lots. NOLA here we come.
Posted by rachel kesel at 2:37 PM No comments:

My best friend and I are moving out of our place, where we've (mostly) lived for the last 6+ years. Since I left for London in summer of 2008, this will be my 3rd move in two years. But it's the last one in or out of this mold hole in the Excelsior of San Francisco. I love my mold hole but it makes my asthma crazy and my landlord is the king of slumlords so it's time to go.

When I moved to London I left all housey things behind ... in the house where I sublet my room. Now Blake and I have to figure out what to do with so much house stuff. Table, chairs, couch, bookshelves ... the fact is these items weren't stellar when we got them used. Now they're much more used than before, with a nice infusion of kitty dander to make them all a bit less give-away-able. But we're trying.

Personally, I'm not keeping much from this house. I'm moving my stuff into a friend's garage and then heading to the South for the rest of the summer. I'm hoping to find some GIS or GPS (mapping) work or volunteer work around Mobile or another part of the Gulf. I'd love to work on that amazing NOAA map! I just finished a massive GIS/GPS contract so I'm hopeful that I can apply my skills toward the oil spill containment/ clean up efforts. Well, not too hopeful since it seems like a lock out down there in terms of jobs and volunteer work. It's surprising how little opportunity there is.

I'm going to try anyway. Blake and I are Amtraking to Georgia as of next Thursday. I'll be taking loads of pictures along the way ... another way to fill the time! If I can't actually help in the Gulf, then I'll at least spend a few days writing and posting images from there, maybe tinkering with online maps too. So expect some posts live from the Gulf of Mexico starting around July 26th.
Posted by rachel kesel at 9:10 AM 1 comment: