The BP oil spill off the Louisiana coast is absolutely devastating. I hope McCain, Palin, Chuck Norris et al are feeling the searing pain of shame for their unforgivably ignorant 'drill baby drill' campaign. It sounds like Obama might have felt some shame for lifting the moratorium on new offshore wells. He decided this morning to put it back in place - for now. 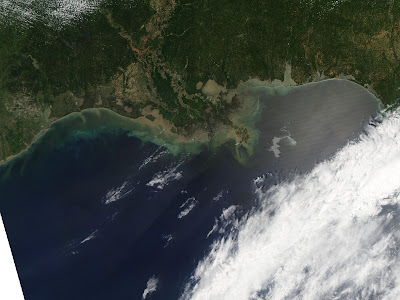 That summer 2008 campaign for offshore drilling - which never ended - included lies such as the assertion that there were no oil spills in the Gulf during Hurricane Katrina. Bullshit. Anyone with a search engine can debunk this lie. We hear endless cooing about the safety and technology of offshore drilling. We're told that oil spills are rare events. The meteor that took out the dinosaurs was rare too, so I'm thinking the endangered species of the Gulf Coast would prefer that we don't chance their lives in these unavoidable ways. I'm sure that the people working to conserve the wetlands of the Gulf are equally devastated and scared.

Though shrimping is very destructive business, I was thrilled to hear that 2 lawsuits have been filed on behalf of Gulf shrimpers. That is a cultural tradition in the area. Family businesses are likely to be ruined. I'm not concerned about the losses of big trawlers who operate on the same short sighted timescale as BP. Their unsustainable trawling would eventually kill the shrimp, other sea life, and the future of shrimping.

Trawlers shouldn't make money by destroying ecosystems and rare species like the Kemp ridley sea turtle. However, their economic influence is locally important and should be considered when weighing the risks of other capitalist crap shoots like off-shore drilling.  As should the viability of small businesses dependent on the Mississippi River for shipping. The impacts of this spill will reach significantly farther than the Gulf Coast.

The argument for more oil is always economic, but these 'rare' events are not fucking worth the risk! We will never account for the losses in biodiversity. How will we monitor and financially account for wetland loss or delays in wetland restoration as relates to future storm buffering?

My family is planning a vacation in to weeks on Dauphin Island, which is 3 hours east of New Orleans in Alabama. I've been waiting to hear back about a really great job so my plans aren't firm. Oddly, I'm even more keen to go now that there might be a need for volunteers. I just signed up to get on the volunteer list with the Mobile Bay National Estuary Program. If you're in the area and know of good organizations to work with, or those which have upcoming trainings, please pass that info along.
Posted by rachel kesel at 9:12 AM 3 comments:

What's in Your Garden?

For many parts of the temperate world, it's time to plant a garden. Here in San Francisco, it's time to plant new things in our year round gardens. Last year my house mate planted corn, peppers, and brussel sprouts before I came back from London. Our summers are cold, so you need luck and heat to get corn and peppers. We had some scary looking mutant corn and no peppers or brussel sprouts.

Our garden failure was pretty interesting, and quite in line with our experimental approach to our patch of (rented) land. Corn is so adept at sucking up nutrients that it's used in restoration to address nutrient loaded soil after invasions of nitrogen fixing plants (ie, the brooms in California).  I was learning that information last summer as I studied invasive French broom while clearly pointless corn languished in my dirt. Blake wanted to give it a chance so I only ripped out individual plants when it was obviously finished. 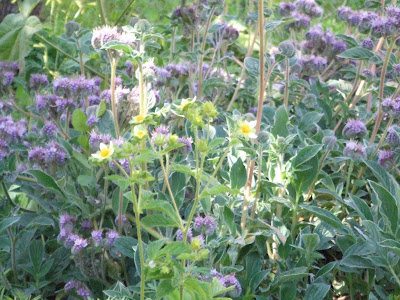 Given that we've been working that area of our garden (< 1mx3m) for about 4 years with no input to the sandy soil, I'm guessing the corn was also stressed by a lack of nutrients. After the corn, our soil looked pathetic. We chose to rest all of our vegetable areas over the winter, though we could have grown greens. Instead we opted to pick up some "organic compost" from the San Francisco's Public Utility Commission at a free event last fall. I applied about 20 gallons to about 5 square meters. I used it as a thick topical mulch to slow the emergence of weeds in the former corn patch (<3msq). I integrated the compost in the remaining area (>2msq) and sowed San Francisco natives from local seed that I collected from my own plants and samples from my field work.

I've kept weeds down by mowing this year rather than full removal to reduce disturbance. I've been leaving the herbaceous material behind as a further mulch as long as it's not in seed. The land turned out about 60 young natives and have already given away the 15 I grew in containers. I'm letting the rest get big, maybe even through next year so they can be planted during the rainy season. I've got about 20 Phacelia, 15 Horkelia, 8 Achillea (yarrow), 8 Juncus, 5 Eschscholzia (poppies),  and more. 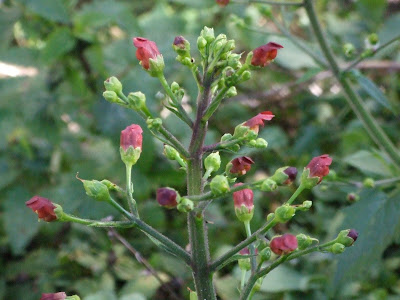 So all seems good in the garden ... until I heard that the "organic compost" might contain toxins. Turns out that the SFPUC sourced their compost inputs from 8 different counties, none of which use the same standards for their processing. In other words, standards in some counties do not remove heavy metals or icky shit (literally) like E. coli.
Ok, I'm not the most reactive person when it comes to toxins. I'm an asthmatic living in a city chock-full of car exhaust. I eat food that comes from the Valley, which I know was irrigated with water that is notoriously full of toxins (as in: If you fall in the canal you need a chemical shower ASAP). I forage in the city and along roadsides. I frequent dumpsters in search of food. 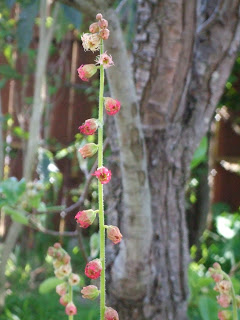 But I have yet to plant in the possibly toxic compost. My hella smart gardening friends, also of the non-reactive variety, suggest I plant something I can cook. I think they're right so I'm thinking beans and peas, nothing leafy. I guess the benefit is that these crops will fix even more nutrients ... though I'd kinda like to see some of the less than nutritious nutrients (the gross shit) taken up instead of fixed into the soil. I dunno.

Anyone have thoughts? I've also thought of just incorporating the weeds as they come up this year and leaving the land open. It seems like a waste though. And I have to hand mow the weeds every couple of weeks lest they go to seed at the moment. That will slow down when the rain stops. Any other suggestions? It's our sunniest spot so it's hard to watch it sit for what will end up being a full year if we plant nothing. And that will be two years of no yield since last year produced only mutant corn. What would you do? Keep in mind that one or both of us might move out of this place permanently in a few months so we need crops that fruit quickly.
Posted by rachel kesel at 10:34 AM 6 comments:

Today I took a walk in Glen Canyon with my friend, Mira to look at wildflowers and wildlife. I was supposed to be in a meeting about GIS this afternoon but a last minute cancellation allowed me to take advantage of today's perfect weather. Ok, the fog's rolling in now but it was entirely gorgeous midday.

As soon as I got into the canyon I ran into another friend - Wait, she's the jogger so I guess she ran into me. I kept walking after our chat and saw some folks staring into a eucalyptus. I've seen that stare so I guessed owl and they confirmed. I had binoculars and still never saw it. Apparently it's in a nest so I'll have to try again.

Though we never saw the owl, Mira and I did see many beautiful flowers, birds, damselflies, and FIVE garter snakes. Holy cow it's snake season! I got pictures of two of them. Enjoy! 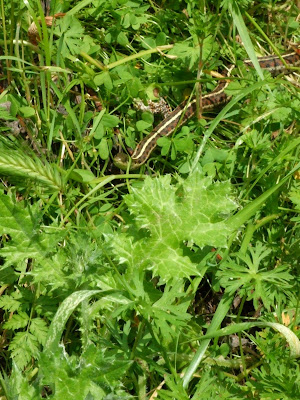 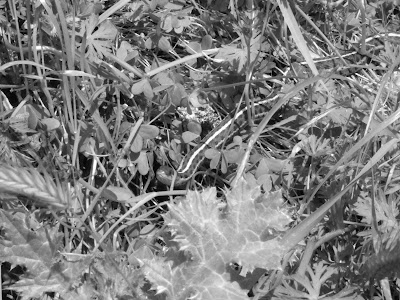 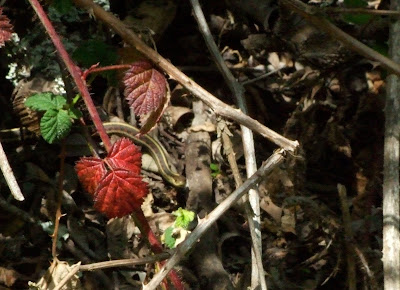 Number 5, edge of willow scrub
Posted by rachel kesel at 4:00 PM No comments:

The rain date for the walk is going to be this Saturday, April 17th at 11AM.
Meet at the water fountain by the South Gate. For more details, scroll down!

hope to see you there!
Posted by rachel kesel at 4:13 PM No comments:

Wildflower Walk Saturday, April 17th at 11am on Bernal Hill

If you're in the Bay Area you should join me this Sunday for a nature walk on Bernal Hill. I'll be walking and talking about flowers and landscapes. A few flower species have already gone from Bernal (star lily and most shooting stars) but there is plenty yet to see. We'll be looking at lupines, blue eyed grass, blue dicks, early yarrow, poppies, doug iris, tom cat clover and more.

Kids are welcome and I'll try to keep the first part of the walk on stroller friendly turf. Dogs on leash welcome.

We'll meet at the water fountain by the South Gate. If you're wondering where that's at, check out this map.

I'm doing this walk in collaboration with the flora friendly folk of Succulence, a new plant shop in Bernal. They'll be providing snacks in their amazing garden afterward so plan to stop in there if you can. Succulence is at 402 Cortland, behind my favorite video store, 4Star. They've got some CUTE plants and are getting equipped with canning supplies, seeds, and jams.

We'll be looking for birds too. I suddenly find I'm a bird nerd ... I used to be so confused by bird freaks but then I met a couple of rad twitchers on my master's course. I don't know how it happened but I am suddenly obsessed with birds, leading me to purchase two bird guides from a used bookstore by the Oakland courthouse yesterday. These days I carry my crappy binocs when I'm dog walking. Bernal's fantastic for red tailed hawks and kestrels. I also see a lot of hummingbirds on the northeast side.

Here are a few enticing pics I took at Bernal today. 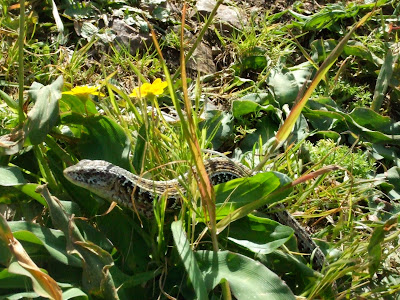 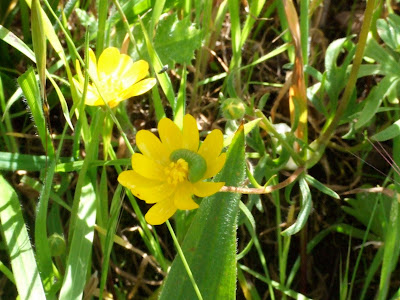 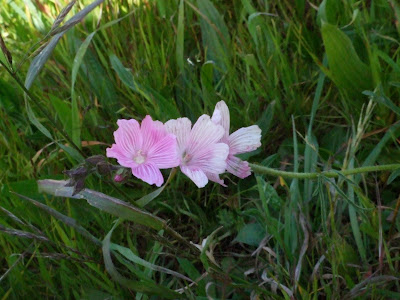 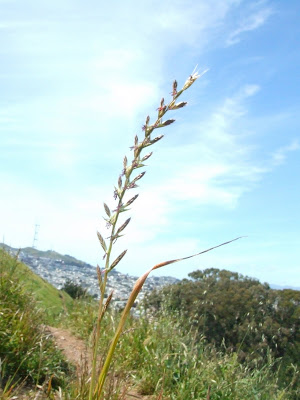 Italian rye grass (Lolium multiflorum) Not native but you can see here that it's flowering. You cannot discern the tiny purple flowers but we'll take a look on the walk. I dig grass. 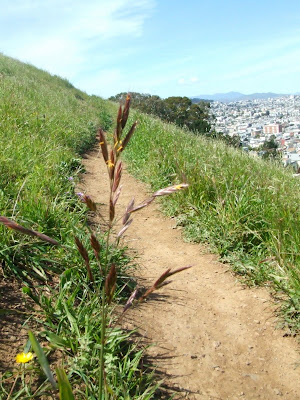 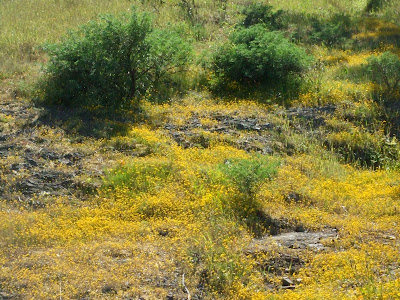