I do my best to avoid air travel. I flew a lot for my master's: first from Atlanta to London, then round trip between London and Tenerife for a field study, then from London to San Francisco. These were the first flights I'd taken in two years, since I went to London and the Middle East in 2006. Those flights in 2006, the first year of the Compact, more than trashed all of my efforts to reduce my carbon footprint through reduced consumption and my regular cycling transit. I used more transit carbon than an average American that year just because I flew.

One factor not considered in those calculations is that I'm vegetarian. Meat accounts for far more carbon release than does transportation. I still don't want to fly. I'm not a big fan of the licensing effect that one step toward sustainability (such as cycling or eating veg) often produces. And I hate flying. Hate, hate, hate. Sometimes I'm the silently crying lady on the plane, who pries her hands from the arm rest to take more sedatives but is still somehow awake. Thank you, Fear.

So I try to use Amtrak. I loved parts of my journey to the Sierra last fall using Amtrak. So when my folks started planning a family vacation on the Gulf Coast in Alabama to celebrate their 35th anniversary, I started looking at Amtrak options. I don't get very far before I close my laptop in frustration.

I have many issues with Amtrak but here's a precise.
1. Its slow, average speed ~ 25mph.
2. Its not cheap, but it's slow!
3. Its website is full of stupid wizards. I love smart wizards, but stupid ones that can't figure out that if I want to leave from San Francisco I might also consider Oakland are unforgivable.
4. All points lead to Chicago but my life does not, ever. (IOW, the routes are insufficient)
5. The Sunset Limited is only 3 days per week!!! (IOW, the schedule is insufficient)
6. Local transit rarely connects Amtrak to National Parks. (Not really Amtrak's fault, I know.)
7. The pricing schemes are absurd given that the system is underutilized and otherwise deficient.

Grrrrrr! I miss UK travel options, but I'm working with a 25 mph train that rarely runs to effing nowhere. I don't just want to use Amtrak because flying is stupid and scary, I also think that Amtrak should  work, and I'd enjoy seeing the landscape from the train.

If I have to fly, then I'm not going to Alabama for family vacation.  No one else in my family takes issue with flying for carbon reasons. My mom hates traveling period, hence a trip fairly close to her Georgia home. Regional vacation is so reasonable! Too bad our family is half in SF, half in Georgia. My dad doesn't fly a ton, but that's not because of carbon. My sister and bro-in-law fly a lot and will fly for this trip, which adds some self-imposed pressure for me to make it. My family doesn't openly lament my unwillingness to fly, but it feels crappy to diss this trip. My dad even offered to help pay to get me there, which is another concern altogether. My sis' and bro in law will drive from NOLA so I'm hoping I can ride with them to 'Bama, but it's far from certain.

Today I called Amtrak because the stupid web wizards made me want to smash my computer. I had determined some dates, including a 2 night stop in Texas to visit Big Bend National Park (cuz the effing train only runs every 2 or 3 days). My back is still not happy after a dog walking injury in December, so sitting for 72 hours on a train will mean I can't walk during vacay. I gotta have a break so when I saw "Alpine, TX (Big Bend Nat’l Park)" on the Sunset Limited schedule dead in the middle of my journey, I though Amtrak was finally serving me well.

I recommend calling Amtrak if you really want to use it. (1800 USA RAIL) The phone operators are much more intuitive than the website and I didn't have to wait long. Soon after reaching a human I was convinced to reserve tickets that included my stop in Texas. You don't have to pay for 7 days, which is pretty cool. I'm really glad for this feature. If I'd bought the tickets during that call, then I'd have been even more annoyed when I discovered on the Big Bend website that Amtrak's quite far from the park and there's no transit to the park. It's like last fall's nightmare attempt to get into Sequoia Kings all over again.

Anyone live near the park and want to give me a lift? Or know if it's easy to hitch in and out from Amtrak? Or have a recommendation for another camping spot along the Texas portion of the Sunset Limited? Any other Amtrak advice? I'm so annoyed I'm (momentarily?) determined to make it work. Time to enjoy my under-employment with a little family vacation!
Posted by rachel kesel at 9:55 PM 4 comments:

Today was something like my ideal day. I biked to the Bay to map sensitive plants, hit two other parks, and spent the rest of the afternoon tending my garden with my cats. If you don't live in the Bay Area, then maybe you're not having painfully beautiful weather. Today it was 70 degrees, sunny, and surprisingly still for March. It's been like this for days, and though I wear a hat, I'm sunburned.

I finished the invasive species mapping just in time to help with sensitive plant monitoring. It's a nice transition after months of tracking the diversity-destroying success of SF's worst weeds. I met Randy and Licia at India Basin, a shoreline park in southeast SF. We were looking for Sueda californica, a saltmarsh shrub that I've never met. We didn't find the darn thing at India Basin so I've still never seen it.

I'm definitely a plant freak but like most nature nerds I've also got a bit of a vernal high, which is potentitiated by stellar weather. Vernal high makes every flower exciting. Even tiny, less-than-showy flowers, like Saxifraga californica, our afternoon species. We found this little Saxifrage at Palou-Phelps and Billy Goat Hill, where we counted any inflorescence and took GPS points. I shared my familiarity with the GPS and Licia and Randy shared their bountiful knowledge of the flora. I love the details that Licia points out, which led me to search for S. californica pictures online so I could see how many stamens the flower has. I found an amazing Flickr page for flora pictures. Check out Saxifraga  and others here.


Though I take crappy plant pictures, here's a sampling of wildflowers you can see in SF and on Angel Island, with locations. Click the pix for larger view. If you use GoogleEarth, I can email you a KML with placemarks of flower details for several SF parks (Bernal, Bayview, Twin Peaks, Glen Canyon, etc). Or follow this link to Google Maps. A real wildflower walk is better than a virtual wildflower walk. So go outside. 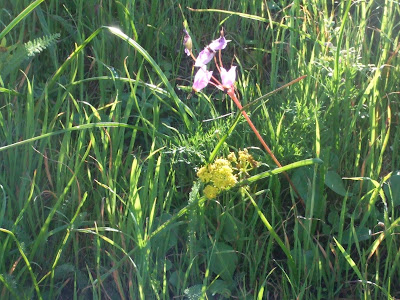 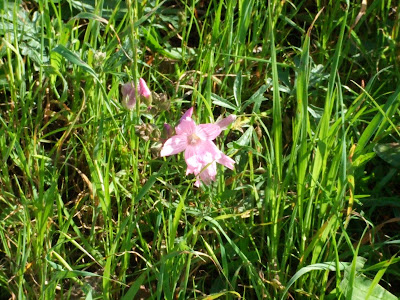 Checkerbloom (Sidalcea malvaeflora) at Bernal.
Flowering in grassland parks. Prettiest at Twin Peaks where the shades of pink can get very dark.
Also nicely showing at Mount Davidson and Bayview. 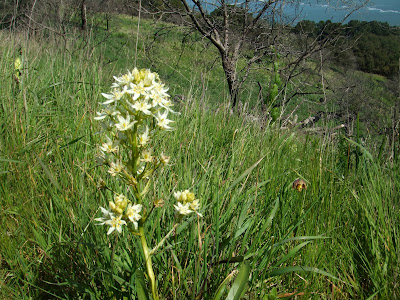 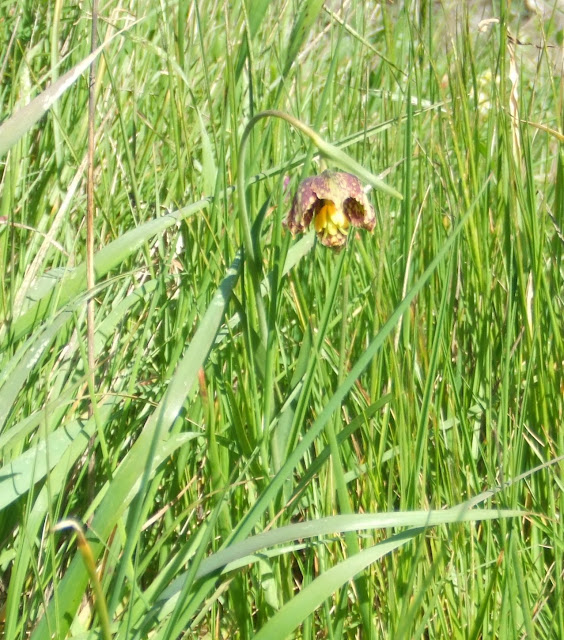 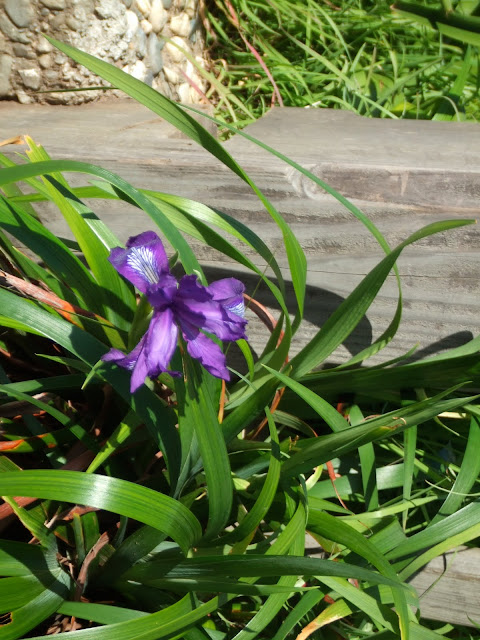 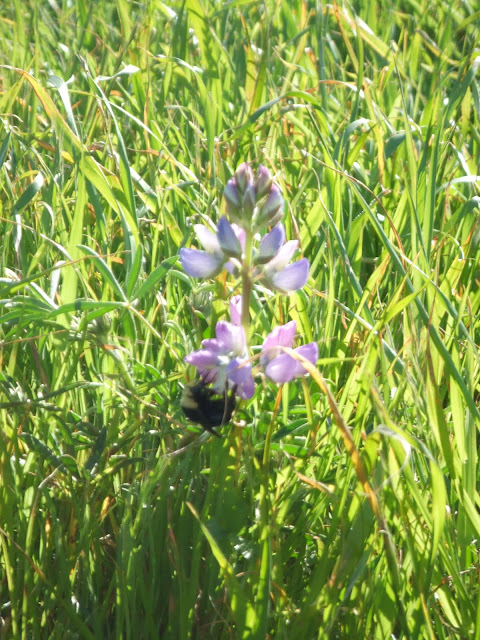 ?Varied color? Lupine (Lupinus variicolor) Definitely a lupine, though I'm not positive it's variicolor.
Photo at Bernal. Also up at Bayview, Twin Peaks, Glen Canyon, most other grasslands. 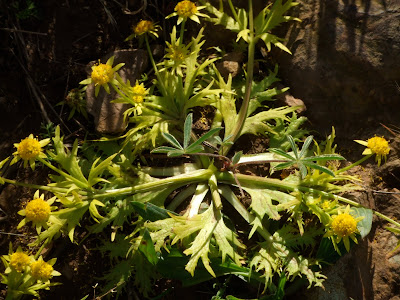 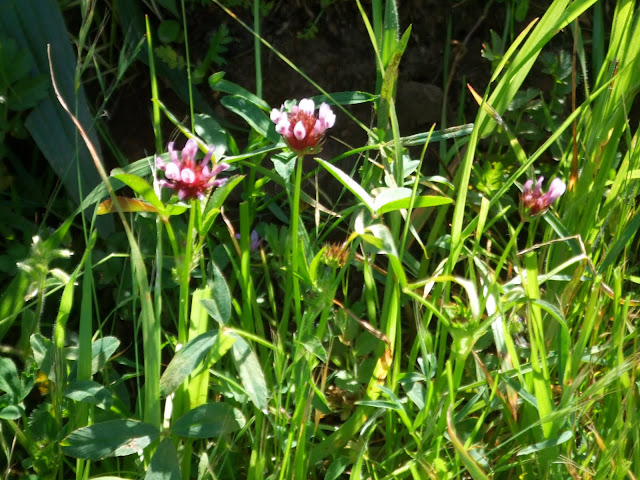 Tomcat clover (Trifolium willdenovi) at Bernal. Cropping up in other grasslands slowly. 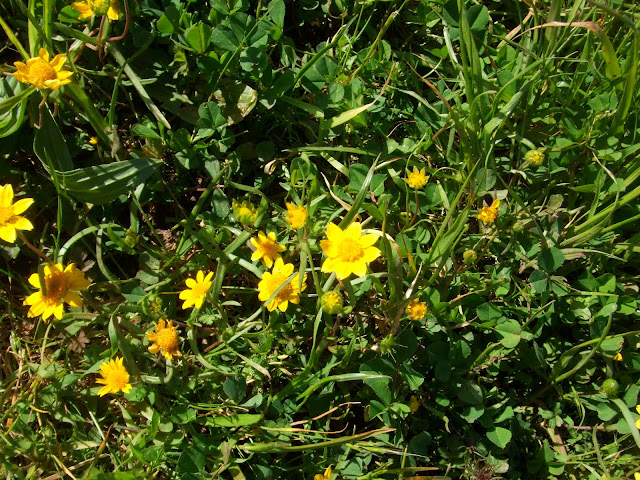 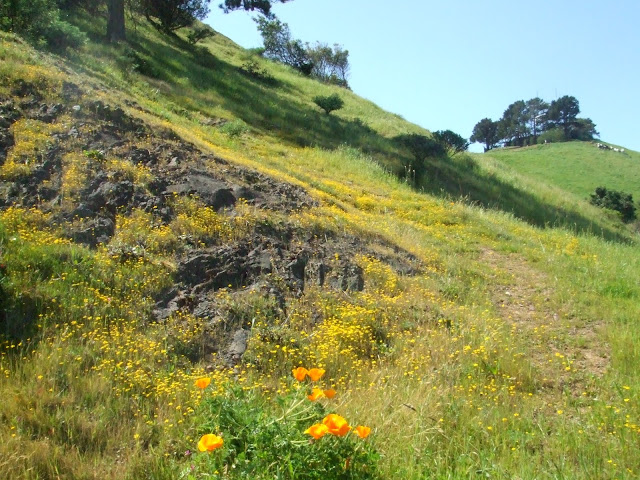 Goldfields (Lasthenia californica) Top is close up of the yellow flowers in bottom pic. Also Cal poppies in bottom.
Goldfields are in wetter areas of grasslands. Hard to miss if they're around. Bayview has the best assortment inside the radio tower. 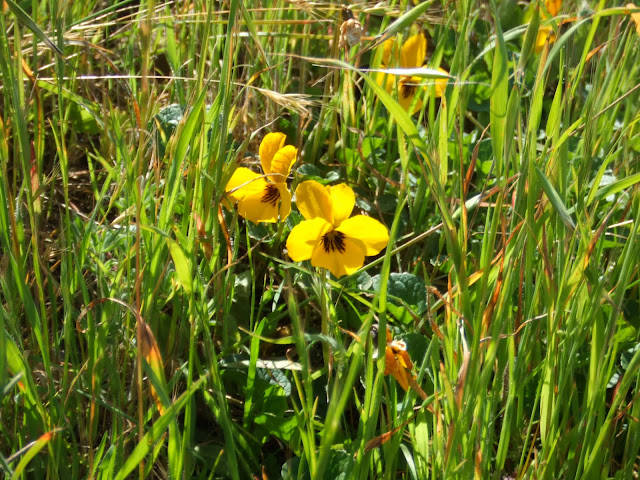 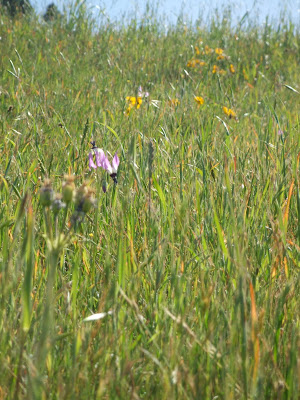 Shooting star (Dodecatheon clevelandii) and Johnny Jump Up behind. Note the fruit of the shooting stars in the foreground: This one will be gone soon so see it asap. Bernal Hill. Small population at Billy Goat Hill. Already gone at Bayview. 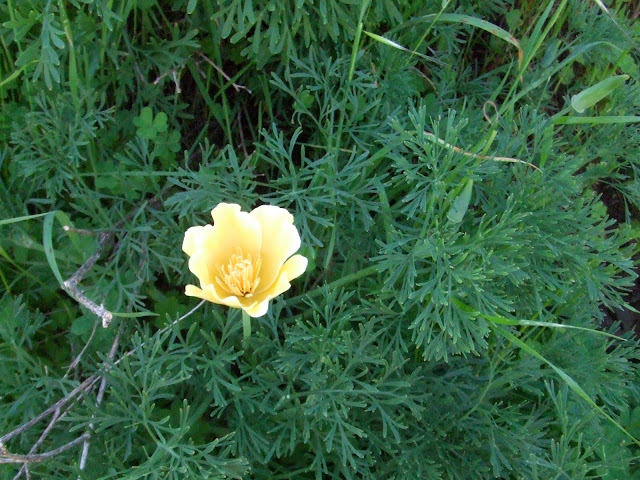 How cool is this peachy colored Cal poppy (Eschscholzia californica)? Individual is about 20 meters up from Folsom entrance of Bernal on the north slope. 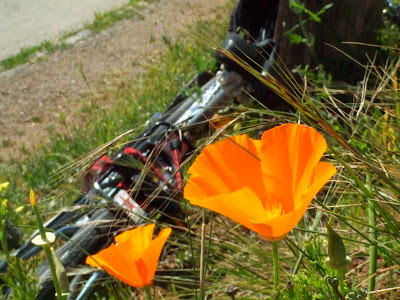 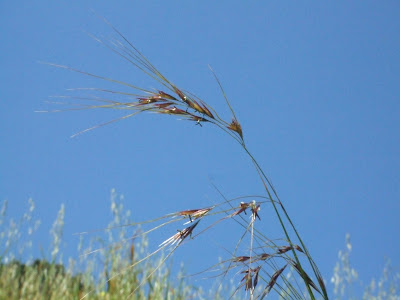 I believe this is also Nasella pulchra. I love flowering grasses! Wind pollination is so cool! 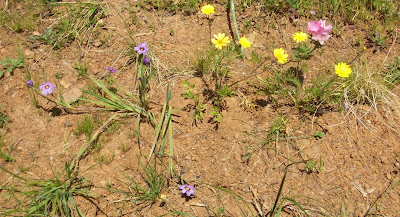 Blue Eyed Grass (Sisyrinchium bellum)  Cal buttercup (Ranunculus californica) and checkerbloom (Sidalcea malvaeflora) on Bernal. You can catch most of these around the city at the mo'. Buttercups on their way out. 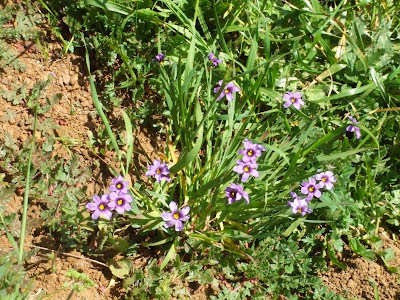