"Eating Animals" a Must Read

If you haven't read Eating Animals, by Jonathan Safran Foer, you really should check it out. I've been vegetarian for about ten years, with periods of veganism or near veganism during that time. As a lover of non-human animals, I'd say I became vegetarian for animal rights reasons. I stay vegetarian because I love animals, but also because eating meat American-style makes zero ecological sense. This book, Eating Animals, really drove this point home for me, and also brought into focus issues of public health that I never truly understood.

My relationships with animals, farms, and meat have been diverse. I come from a family of hunters and have eaten fish and game such as deer, frog, rabbit, and turkey. I hunted and fished with my dad as a kid. Those experiences were instrumental in my development of a holistic land ethic.  My grandpa raised about 350 head of cattle in Missouri on about 400 acres of pasture, which defined a lot of my mom's childhood and attitude toward food. He died in 1992, right around the time when my uncles on my dad's side started losing their hog and dairy farms to corporate agriculture. Guess who grows soy for hogs and cows these days. My parents met as workers at a restaurant corporation for which my dad still works. My older sister worked there. My five plus years working there as a teen surprisingly turned me into an anti-capitalist but not a solid vegetarian.

That came at eighteen or nineteen, depending on whether you mark time by attempts or purity. As I wasn't trying for asceticism, I usually say eighteen. I read The Jungle as a teen, Animal Liberation  at twenty. I went to PETA conferences on veganism. I stickered supermarket turkeys with scary images and startling statements on Thanksgiving. I read Fast Food Nation, remembering that my entire family was wrapped up in this crazy drama of the American diet. I remembered my uncle Hank's nursing sows on their sides and trying to cuddle a runt that shit all over me. I remembered the distended udders of Holsteins at my aunt Gail's place, where I would later solidify my extremes for animals by using her sewing scissors to cut matts off of a border collie. (Not so cool with Aunt Gail, who is an amazing quilter.) I owned my relationships to meat for years, occasionally pissing people off at dinner or holidays, but always feeling honest.

Then I kinda became one of those vegetarians who tells herself she doesn't have to think about meat consumption because she's not part of it. My friends and family were probably stoked, and it was certainly easier. I allowed myself what Foer refers to as "forgetting". I let myself be as divorced from the impacts of American-style meat as a typical American. I felt a little less pain than I did in the days of my early twenties when I routinely stated that I didn't "eat carcass". I didn't watch films like Food Inc and I never read Omnivore's Delimma because, for me at least, there is no dilemma. I knew where I stood.

I hate being bombarded with the horrors of factory farming. I'm very sympathetic toward animals, as anyone who knows me would verify. I had many companion animals as a kid, and my dad always protected my sensitivity when we had to euthanize a beloved family animal. That was the right thing to do, and though I've matured, I can't really digest the horrors of factory farming. I regurgitate in tears and sobs that might make you consider whether I'm a reasonable advocate for a sensible diet or just an animal rights extremist. So I don't watch movies about food. I don't read articles or books exposing factory farming. A lot of it feels like disaster porn. I don't really empathize with a director who tells me to give a shit about individual animals while displaying the horrors of their treatment, the indignity of their individual lives. I say that knowing that some people really need to see that shit. People in denial need to own the violence of their food. But I'll say that I can be an advocate without those images, so I don't watch films on food.


But a few months ago I started seeing reviews of Eating Animals that piqued my interest. There were enough articles to convince me to request the book from the SF Public Library, where the hold list was about 50 people long. I finally got the book 3 weeks ago, which turned out to be right around the time I'd convinced myself that I was ready to read it with an open mind. And I'm really glad I did. I read it slowly over my three week loan period, in part because bits were painful, and in part because bits were too beautiful not to savor.

I don't really know what to tell you to compel you to read the book, except that it reminded me to be honest about food. Foer wrote openly about factory farming without relying on the cheap horrors of the industry to engage his readers. Instead he emphasized reason and intention, which resonate much more deeply with me. He drew an honest picture of modern "farming", one that discredits our fanciful images of farms like my grandfather's, which are not the ones that feed us today. Foer drew a global, holistic picture of farming, emphasizing ecology but also raising issues of equity, worker's rights, and public health.

Frankly, Eating Animals, is the best book I've read in years. I can't wait until I can find it used so I can have a copy in my personal library. I resisted my inclination to underline or annotate the SF Public Library's copy, but will enjoy doing so when I can read my own copy some day.
Posted by rachel kesel at 5:14 PM 7 comments:

I took a bit of a winter break from the posting but am finding renewed energy as the days get a bit longer. I couldn't bring myself to write another piece on the woes of Christmas consumerism .... It happened. I saw it. I didn't engage so why should I have to talk about it?

In lieu of shopping I've been out in the parks as always. It's been very exciting to see the first native wildflowers germinate, bud, and bloom. 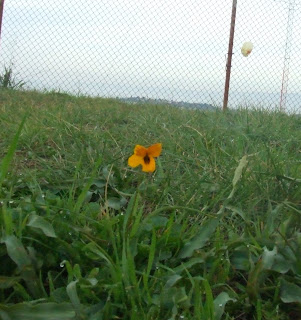 This is a Johnny Jump-Up (Viola pedunculata) on Bayview Hill on Jan 10 2010. It's the first one I've seen anywhere in the city.
This is a partial list from Bernal Hill, where I walk dogs. I spend enough time there to see phenology at work. In order of their appearance:

Also blooming are the more subtle Miner's Lettuce (Claytonia) and a weedy native, Cardamine oligosperma. Some other plants have germinated but are waiting to flower.

I collected a bunch of seed off of my plants and any samples I took in the field over the summer. I planted those a couple of months ago in my backyard and in containers. I've got about 15 lomatiums, 12 lupines, 2 columbines, 25 phacelia, and hopefully some yarrow and grindelia yet to come. I had more but a massive snail attack decimated my stock. That's what I get for moving the nursery into the garden to shelter through a storm! I'm giving them away so if you're in SF and need some outdoor plants, lemme know.

Lots of invasives are coming in as well. This puts my mapping contract back in high gear as I plot Oxalis pes caprae on a nifty handheld GPS in 3 parks across SF. I've seen my friend the Twin Peaks brush rabbit twice in the past week, bringing my total sightings to 3 in 7 months, which is pretty stellar considering folks thought they'd been extirpated.

When I'm not mapping weeds I'm eating them. Don't forget the invasive species diet! I saw "dandelion greens" for sale at the grocery store today and laughed outloud. I just pick them myself and add them to salad. Toss radish flowers on top and it looks quite pretty. I don't pick the Miner's Lettuce b/c it's native. But I do eat a  lot of the mustard greens that are quite tender and tasty at the moment. Oxalis is also called sour grass, very yummy! I find that eating invasives gives me a chance to enjoy them, unlike when I map them with plain resentment and muddled anxiety.

In addition to eating invasives, I've been exploring a bit of herbalism. Mostly I've been reading about controlling my asthma, which kicked off hardcore about a month ago. My flat got a bit moldy when the rains came. I've never had asthma like this but I'm happy to say I'm finally getting some relief with a combination of herbs and western meds.

As it happens, my incredibly vivacious grindelia plant will come to new use this year as I dry the gummy buds for lung healing tinctures. A good friend told me to try it, which I did after about a week of ho humming about how I'd wait until I could make my own. Alas, this one is a very late bloomer so I bought a tincture. While I was at Rainbow I grabbed some Osha on the same friend's recommendation. As I've heard it, Osha translates to "bear root" in a local/regional indigenous language. Bears would eat it when they came out of hibernation to help expel their mucus. Lemme tell you, bears are hardcore. That shit inspires severe fit of coughing, but productive coughing. I'm using invasives for my asthma too. I snag eucalyptus leaves to boil so I can breathe the fumes and drink a bit of the oil. If you're thinking, "yuck" you're right.
Posted by rachel kesel at 12:07 AM 4 comments: