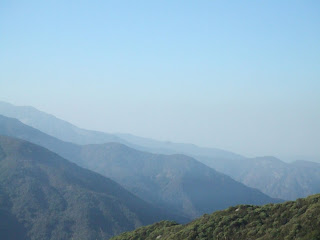 After the fieldtrips I got into Sequoia National Park with some new found friends. We camped at Potwisha, highly recommended by locals we met at the conference. Conveniently, a star gazing talk started right next to our site! Presented by a park staff member with the fanciest laser pointer ever, this talk was a great reminder of another way to love nature. Flood lights at the KOA had obscured any stars peeking through the cluttered atmosphere in Visalia, but the dark in Sequoia gave the stars ample opportunity to shine, twinkle, and even shoot. We had ascended above the smog, which we learned had been accentuated by a 300-ish acre fire in Sequoia NP. We saw constellations, Jupiter, and the Milky Way, talked of myths and legends, and breathed a little deeper. Crossing the road later for more open sky, my posse saw a fairly massive mule deer before we lay back on the ground for more star gazing with water rushing below and critters noisily creeping in the woods. 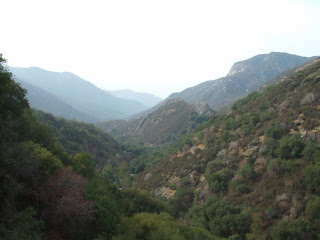 Nature is restorative ... for me and many others. I slept well and awoke feeling fresh and smiley. One friend took off that morning, leaving 4 of us to explore the park. We drove through the Great Forest, admiring the massive Sequoia's, which adeptly shade the forest beyond the capacity of my point and shoot camera. At the Lodgepole visitor's center park staff confirmed that the Lakes Trail is a great choice, calling it "the best trail in the park". It's worth mentioning that park staff and locals in the Southern Sierra/Tulare County always steered us right on this trip. We were pressed for time and got the best advice!

We drove on up to 7,000 feet to park at Wolverton. After a snack we set out to see as many of the lakes as we could manage in a day hike. I've never hiked at such high elevation and was immediately getting my ass kicked. At times the dry trail required us to walk fairly far apart lest we inhale loads of dust. With an experienced marathoner leading the way, I felt less than fit but was truly enjoying the area. We couldn't have been going for more than 20 minutes when we saw a black bear, the first wild bear I've ever seen. 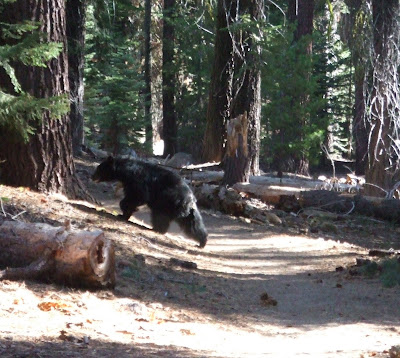 He hung about for ages, gnawing on sugar pine cones downslope. We took loads of pictures and gawked as he climbed the slope in our direction, crossed the trail and sniffed for more food. As resolute lovers of wildlife, we stood still and quiet as he started to walk toward us, perhaps curiously. Eventually, when he was about 30 feet from us, Price wisely, loudly said, "That's enough". Relief and disappointment mixed with persistent wonder and eagerness. 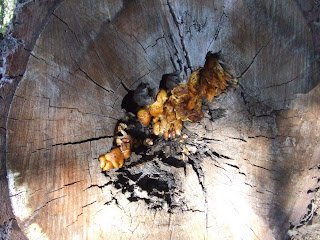 Seeing the bear so early in the hike made the shallow, dust-laden breaths worthwhile. Besides charismatic megafauna, there were hawks and other birds overhead, swift chipmunks, and the occasional lizard. Lichens, mosses, downed trees and fungus brought amazing color to the forest. Bits of melting snow remained in evidence of the elevation. Again, my camera, particularly when combined with my skills, doesn't do the scene justice. 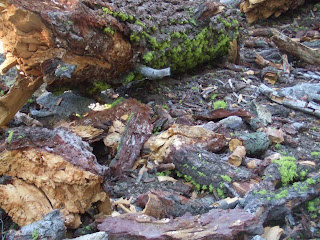 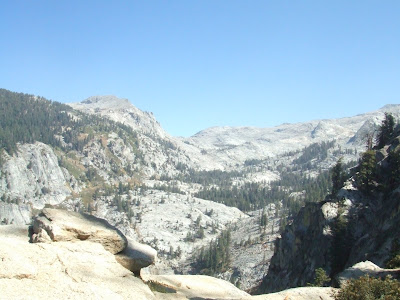 We climbed beyond the dusty trails of the denser forest into an area dominated by granite outcrops and boulders. Boldly colored lichens grasped the granite and sparse conifers made the trail evident ... until we reached a spot that was just rock. We hiked to a terminus over-looking a long valley. I sat on the firmest looking boulder I could find and waited while my new friends looked for the trail. Much to my relief, we had missed a turn on the way to the Watchtower, which we reached soon thereafter.
Without trees to abbreviate the horizon, I had a bit of vertigo hiking along this overlook. Luckily the hike leveled out a bit along this rocky section of trail. I'm not great with heights but I got through this pretty well, maybe because I had no spare oxygen for anxiety. The views were expansive, stunning. Trees in the valley below looked so small and lichens colored the granite. 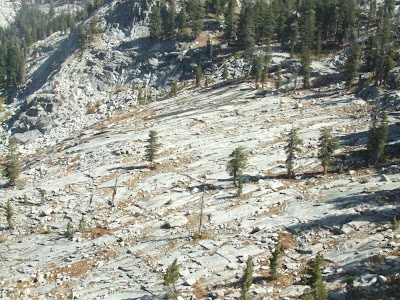