Dispatch from the ... Rain?

Oddly, it's pouring today in San Francisco and many other areas of California. After spending several dusty days in the San Joaquin Valley and the Sierra, I'm pretty stoked to see this early season rain outside my window. I can't help but analyze it from the weed worker's perspective, hoping it's a solitary event that will be followed by several warm, dry weeks. That might crash some of the invasive annuals that will sprout in the coming days.  However, as this is a heavy rain and we had a small one in September, they might be getting a boost.

Returning to the dust, things got better in Visalia about 2 hours after I wrote the last post so I'm going to back way up and spend a couple of days writing about this trip. I'll start with traveling from the Bay to Tulare County and get to Sequoia in a few days. Stay tuned for some pretty pix of the trees, lichens, lakes, and even bears. 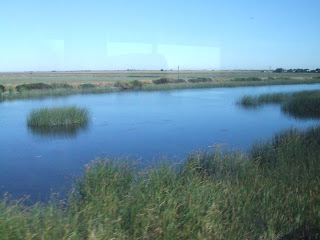 I caught Amtrak in Oakland around 10AM on Wednesday with my bike and camping gear. The ride north along the east side of the bay offered fantastic views from the seats upstairs. I saw a coyote, squirrels, and waterfowl as we chugged past open water and salt marsh. Between fragments of beautiful bay habitat were large factories poised to take advantage of the harbor and railroad. Though most appeared purposefully nameless, I recognized the ever-polluting Chevron refinery and a PGE power station. Only a sugar factory had the temerity to associate its name and logo with its old industrial building and accompanying emissions. 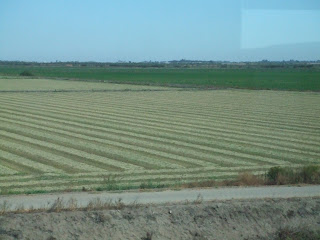 When the train entered the valley the scenery became less enchanting. Agriculture replaced wetlands. Smog blurred the horizon in all directions, erasing topographical features in its apocalyptic haze.

I got off the train in Hanford to ride 15 miles to a KOA camp in Goshen. Large trucks losing dusty silage roared past in the opposite direction, washing me with debris and dangerous gusts. The flatness of the road hardly compensated for the fast traffic, dirty air, and rough shoulder. At least it wasn't hot!

Arriving at the KOA camp nearly 2 hours later was a relief. As I propped up my bike to go into the office a woman on a bike with cheerful purple and white streamers rolled up. We started talking and by the time I had registered we realized that we were both going to the Cal IPC conference. I deposited all of my gear in Beth's car and we rode toward Visalia to get some dinner and what turned out to be margaritas the size of a baby's head. I was so lucky to meet Beth at the campground. We were able to cycle back from the conference together each night, which made the dark, 8 mile journey a lot easier to travel. Especially when you add in all 3 flat tires between the 2 of us. I'd point out that both of Beth's were caused by puncture vine, as though the invasive plant knew we were in town to discuss the eradication of pesky plants. Seriously, how crazy is that?
Posted by rachel kesel at 4:51 PM