This morning I woke up around nine for coffee and an hour of reading under the cries, shrieks, 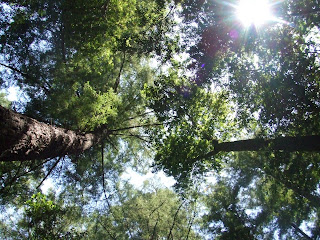 and calls of so many nameless birds. Then I got in the pedals on my way to Armstrong Woods, a state park known for its redwood forest.

The ten mile ride took about 40 minutes: I never had to put my feet down! Ten miles in SF or London takes forever, unless it’s super late at night. Of course, in SF if you go ten miles you’ve definitely crossed a few contour lines and gone in some sort of circuitous route as the city is only 7x7. Anyway, fabulous ride. Drivers out here are pretty down with cyclists.

The Russian River is a very NorCal, open-minded-esque area. Guerneville might have more rainbow flags per square mile than in the Castro. Actually, that’s how I first got to know the area. I came through here in 2002 with some of the Q-Force crew (group of young queer volunteers doing service 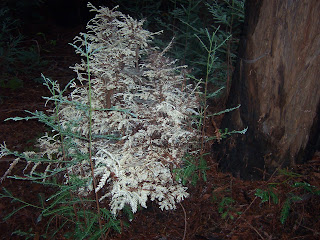 projects ... and trying to get to know each other), then again for a Q-Force retreat in 2004, during which I saw this albino redwood. Coast redwoods (Sequoia sempervirens) are often “sisters”, linked by root systems, clustering in rings. Thus the albino, completely lacking chlorophyll, takes nutrients from her sisters, persisting in this stumpy form.

I hiked into Armstrong Woods thinking I’d do a lower circuit, just enjoy the trees. But it’s Saturday and I have a hella low threshold for tourists in such a setting. I know that sounds awful but I like a quiet hike at a good clip for maximum wildlife viewing. So pretty soon I’d given up on the lower elevation walk and hit the switchbacks. No pushchairs up there. I saw an average of 4 people per hour as I climbed out of redwoods into manzanitas into oak savanna back to manzanita back to redwoods. 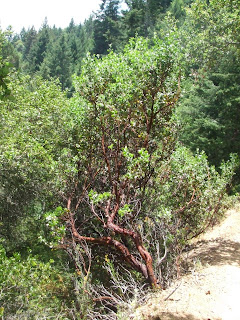 I met two guys who stopped to ask me about my tank top from Glacier National Park. The first asked if I got it for volunteering because apparently I “look like a volunteer”. I like volunteering, and do in fact have what I call my uniform of volunteer t-shirts in which I generally work. I’m a walking advertisement for Pets Are Wonderful Support, AIDSWalk, and the San Francisco Bicycle Coalition. But no one’s ever said that I just look like a volunteer. Maybe that means I look too broke to have paid work.

We got to talkin’ about the park, Cali budget crisis, impending state park closures, property tax, Prop 13, growing weed, legalizing weed, taxing weed, getting rid of the governator, pride, and the lack of social engagement in “my generation”. I guess meeting a 28 yo who can rant about Prop 13 surprised them. By the time we hiked our separate ways, one of them was giving me his card, saying, “I don’t know what I could do for you, but if you ever need help, call me. I will help you”. I was quite touched. As I walked on I thought that he had helped me just then, restoring my confidence in the people’s interest in and support of conservation. Then I noticed that he works in real estate and allowed myself to daydream for the next mile or so about him giving me a property to manage for conservation. Vacation is a time for such daydreams. 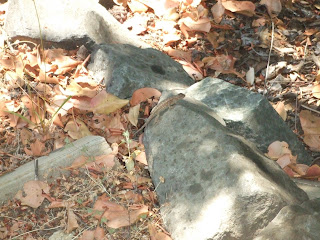 I saw about 40 lizards, maybe ten of whom dropped their tails at my approach. One was as small as the tip of my thumb but as quick as a whip. I didn’t see any deer, surprisingly. And no snakes, though I was quite convinced, given the warm sun that today I would see my first wild rattlesnake and not scream or run. I shall have to steel my nerves another day.

Though the above guys thought I looked like a volunteer, they should have noticed that my dumb ass had no water, contrary to good practice. I thought I’d stay in Armstrong Woods for an hour at most, always in the shade. But I hiked beyond Armstrong, in and out of Austin Creek State Recreation Area, gaining about 700 feet of elevation over 5 miles on 3 cups of coffee and a cliff bar. By the time I made it back to my bike, I was getting a bit light headed and more than a bit annoyed with myself. But I had plenty of water on my bike so I made my way back into Guerneville for groceries. I shopped on an empty stomach, inspiring me to spend $50 on weird food like a can of Cajun beans and rice and a $7 jar of salsa despite the fact that I make kick ass salsa.

I rode back, stopping to photograph the ospreys on the way. I ate the fuck out of some chips and $7 salsa. And now I’m going to baptize myself in Austin Creek. 20 miles biking, 5 hiking, a few hours reading, and a little swimming: Perfect vacation.
Posted by rachel kesel at 8:56 AM