is my new poster? 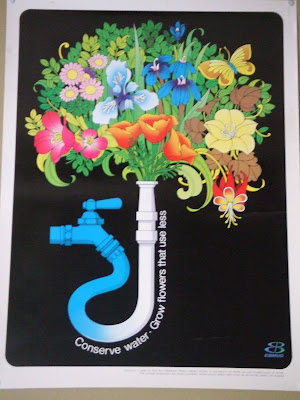 I got this today from a retiring teacher, who was having a garage sale on Guerrero St. The poster was part of a water conservation series created by East Bay Municipal Utility District (EBMUD) in 1976. The poster encourages the gardening of California native plants over other species because local flora are drought tolerant, requiring zero to very little water in the summer. On the back each species is listed. I wish I could hang up both sides at once.

Corporate agribusiness and the governator are resurrecting plans for the Peripheral Canal, which could be as wide and long as the Panama Canal! Given my new poster and these developments, it must be the 70's ... not that I was alive then. And yet, water history of California is clear: This is a dry state with rampant development. We've had the same water problems for decades. Right now, powerful agribusiness is gearing up for a huge fight over water. Cynically framing the debate as "fish vs people" these moneyed players have hired powerful PR firms, including one that has worked for AIG and Blackwater, as documented here.

My own cousin recently sent around a conservative rant against a bunch of things, including the use of water for fish in California. Given my study of California water resources and actual experiences with it, I felt it necessary to offer my Missouri cousin some resources on the issue. Missouri is humid with annual precipitation around 800mm. Until you spend a year plus in an arid or semi-arid climate, you probably can't imagine going 6-9 months without a single rain, but it happens here. Funnily, London, perceived as super wet, only gets about 580mm/year. Georgia ~ 1200mm/yr. Los Angeles County ~ 380mm of rain per year ... and 10 million people.

Three years of lower than average rainfall have renewed calls for the Peripheral Canal, new dams, and allowing fish to perish in the failing Bay-Delta. It's worth noting that rainfall estimates come in averages, whereas nature fluctuates in the distribution of its bounty. In other words, low rainfall should not be unexpected! We've developed the West based on poor estimates, literally alotting more water than exists. Take the Colorado River Compact, in which we declared that states in the Upper Basin (CO, UT, WY, NM) would receive 7.5 million acre-feet per year and states in the Lower Basin (CA, AZ, NV) would also get 7.5 million acre-feet. Oh, and according to an international treaty, Mexico will get 1.5 million acre feet. That's a total of 15.5 maf. But research shows that the Colorado River offers about 13 million acre-feet per year. Similarly, this canal is currently proposed as being bigger than the amount of water that can possibly be diverted from it!

Corporate agribusiness and our fanciful politicians need to turn off Second Life and rejoin the rest of us in this arid reality. Much of California is dry, very dry. Upping supply will only delay needed conservation measures. It's time to renegotiate antiquated water contracts. It's time to make it financially sensible for agribusiness to modernize irrigation systems rather than waste it, producing field fallowing salt in the process. 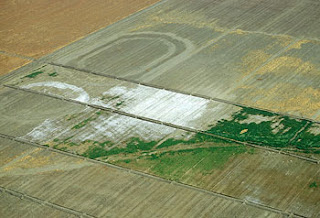 In some counties, individual houses pay more per gallon than agriculture for water. If we're going to subsidize water to the extent which we currently do in California, let's subsidize modernization of irrigation systems. Every sector of the economy is troubled at the moment. I'll worry about agriculture more than the rest when I can go into the Valley midday and not see spray head irrigation throwing our precious water into the parched air for evaporation. I'll feel sorry for agribusiness when I stop finding perfect food in skips. And I'll begin to forgive policy and profit makers when I'm damn sure that the SFBay Delta will not go the same way as the Aral Sea (image below) or the Colorado River Delta. 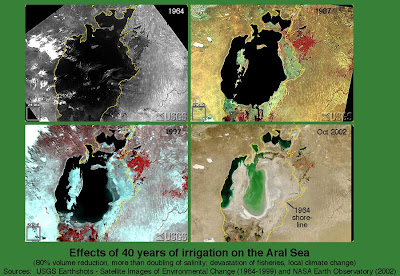 I'm pretty sure you don't mean 10,000 million people. Isn't that bigger than the whole world population?