(This is the final installation from my trip to the Russian River. The pictures enlarge if you click them, helpful for some of the smaller ones.)

I left the house at 10 AM this morning, intending to grab coffee in Duncan Mills and head to the coast for an hour or two. I expected to be back by 1pm to do some work. Eight hours later I’m enjoying a beer because trying to work in my sun frazzled state is pointless. I don’t even have the wherewithal to make food, despite the fact that I rode over 30 miles on coffee and and a pastry. 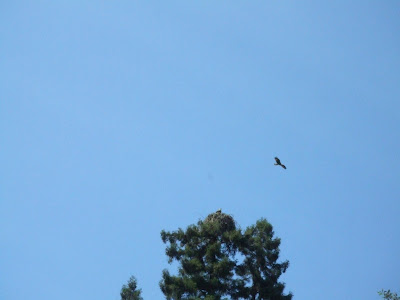 PCH going south to get into the Sonoma Coast State Beach. Though sun poured through the inland trees, tendrils of fog lingered over the headlands, extending in from a solid bank off-shore. I consider the fog quite beautiful and most of my coastal experiences in Cali include it. This fits my image of the poorly named Pacific as cold and somewhat menacing. Softening my view of the sea today were my friends the cormorants, enjoying that silly, low flying game they play.

A flock of pelicans crossed my view, taking center stage before the coastal gray backdrop. Biking down to the beach I enjoyed the gems of the coastal prairie, one of my all time favorite habitats. 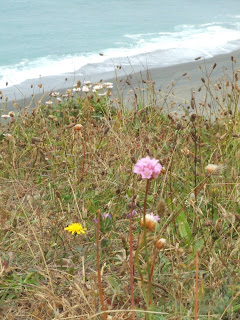 What can compare to the prostrate shrubs and grey perennial grasses? Yeah, I’m actually asking that after describing the majestic redwoods that begin just east of this coast. I try not to be a habitat supremacist as my own beloved landscapes are often maligned. Think English conservation students AND professors using the term desert to mean wasteland. That’s not only habitat supremacy, but what I also call, green supremacy. I like the brown and grey stuff, too. And I try not to forget all the blue stuff out there.

I walked out onto some brown stuff today, namely sand. I wandered out to the harbor seal nursery, where the Russian River meets the sea in a calming nexus of salt and freshwater, a brief mediation of the ferocity of the Pacific. Crouching with my camera, I wished that I were not so optically challenged. I obeyed the signs, staying 50 yards away from the seals, or as far away as I needed to be judging by their raised heads or general interest in my slow movements. I like seals. They’re silly and hella lazy. Like water loving cats with no landward grace or appreciable ears. 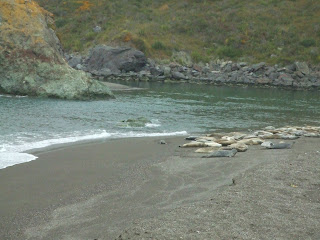 I felt the cumulative effects of daily 20 mile bike rides as I pedaled upward, away from the beach toward 1. No worries, it’s all downhill or flat from here, I thought. On the way out to the State Beach, I saw a road east of 1 that I looked nice and quiet. Inspecting Willow Creek Road on the way back I thought, "Isn’t that the name of that road I took between Duncan Mills and Monte Rio?" So what if the sign paradoxically says “No Through Access to Occidental”. I didn’t want to go to Occidental anyway.

The ride down Willow Creek Road was joyous. My eyes got a little dewy as I surveyed the riparian habitat, noting a lovely warbler, possibly a Wilson’s, many many butterflies, and several turkey vultures. The lack o 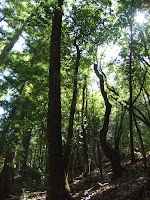 f cars completely made up for the shitty pavement. I pedaled in the sun, fully expecting to pop out on a little road that I had ridden down 2 days earlier. When I arrived at a vehicle barrier, I proceeded past it on my two, non-motorized wheels, leaving the riparian zone, to climb gradually into a redwood forest. Hmmm, winding and slightly inclined, the road offered such beauty that I couldn’t really be dissuaded. Few cars had become zero. Few people had become absolutely none.

Thus I found myself winding my way up a mountain, convinced of the divineness of it all by the lack of cars and other humans. As the trees became manzanitas, ever so briefly, I realized that I was getting pretty high up there. Was that Willow Creek crossing the road, requiring those occasional culverts or water bars? Was I still on Willow Creek Road? I considered backtracking, but that’s not very fun, now is it? Stubbornness, and the luxury of not having any obligations to other humans or my favorite dogs, sent me right up a mountain despite hunger and a bit of tiredness. I also had myself convinced for a mile or so that I was trespassing, which stilled my resolve at a breaking point on the gravel ascent. I realized later that I was not trespassing, which at that point was a welcomed feedback, as I was so tired that the thought of arguing with some private property schmuck nearly inspired me to go 180 and let the brakes wide open.

A couple of hours later, as I crossed a patch of oak savanna, I caught a glimpse of the fog bank off the coast ... which was many miles away. Oh, boy. The Russian River Valley was definitely to 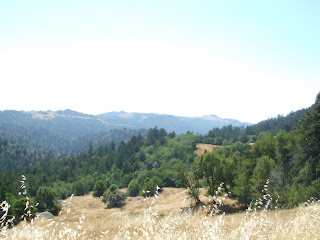 my north (and left), and I was looking down into a different valley altogether. Another vehicle barrier and I was out on a paved road again. No more gravel. At least I could let up worrying about punctures. (Oh, yeah, I had a flat kit and pump, but no spanner for the front wheel should it blow.) It was pushing three o’clock and I had no idea where I was. However, as I could certainly find my way back, had I the willingness to backtrack, I was not lost.

I followed my gut and ended up in … well, Occidental. No through road for cars, but if you bike forever, you will end up in this bougie little wine country town. I took Coleman Valley Road down to Bohemian Highway. Straight across the road was a natural foods store that supplied me with a much needed sandwich and directions to Hwy 116. When the cashier asked if I wanted to go to Santa Rosa or Forestville on 116 I realized just how far away from Cazadero I had gone.

At 3:15 I left Occidental, headed toward Graton Road, which would take me to 116. I have seen every town in Sonoma County on this trip, I swear. I’ve driven from Sebastopol to Cazadero in a car several times so I knew that I was hella far and that there were winding hills in my future. I was fucking tired and evening traffic was kicking off. I was really questioning my car free adventure as massive trucks wooshed past me on blind curves. With poison oak, blackberry, or some spiteful invasive like French broom or pampas grass waiting to molest me on the right, menacing motor vehicles threatening to crush me on the left, I felt that familiar annoyance with 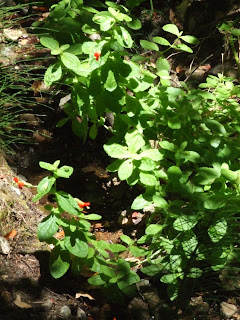 myself. My mind drifted from the task at hand (propelling myself forward while not getting squished). Invasive mustard (Brassica nigra) and poison hemlock (Conium maclatum) overtaking plots in a graveyard inspired undue offense as I pedaled slowly past.

When I finally got back I flipped open a map and realized that the cashier sent me on a very circuitous route. Had I continued to follow my internal compass, I would have shaved off at least 5 miles. Oh well, the wild Mimulus cardinalis (Scarlett monkey flower), butterflies, and deer made it all worthwhile.
Posted by rachel kesel at 3:55 PM

I so enjoyed your pictures and descriptions, Rachel. I'm over 50 and spent my first 40 years as a California native enjoying the beautiful and diverse habitats the state has to offer. Thank you,
Susan in CO