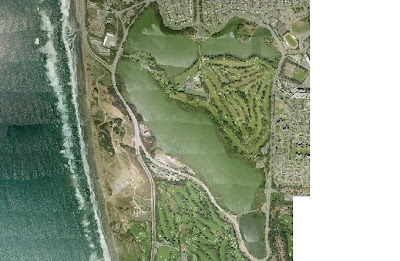 I finished up my vegetation sampling at Lake Merced on Wednesday. Perhaps I should say that I finished the fieldwork portion of the sampling: I still have some outstanding grasses from Twin Peaks to identify. I also have to go back to Bayview, Twin Peaks, and Glen Canyon to do some additional mapping with the dinosaur GPS. Again, I'm writing this post as my ArcGIS images load, however I hope to rectify that problem today by clipping the giant aerial photographs!

Of course it's gorgeously sunny out. Today is the Really Really Free Market in Dolores Park, where there will be thousands of people gathering for the Dyke March as well. I'm gonna have to go later.

Right now my mind is on Lake Merced, where I spent a week in the narrow margins between the roadway and the shoreline. If you look at the photo, you can see that roads hug the lake, leaving about 50 meters of dense scrub to the water edge in most spots. Larger areas are utilized for Harding Golf Course (obvious in the upper right part of the top image) and a shooting range on the west shore in the whitest area. It's difficult for me to say which of these exclusive, expensive visitor uses I despise more. The golf course takes up more space and required an 18 million dollar fiscal input a few years back, but the shooting range is an audible nusiance regardless of where you are on the lake. Both contribute toxins to the lake water and surrounding habitat, as if this heavily impacted refuge for birds needs more challenges after decades of manipulation and pollution. 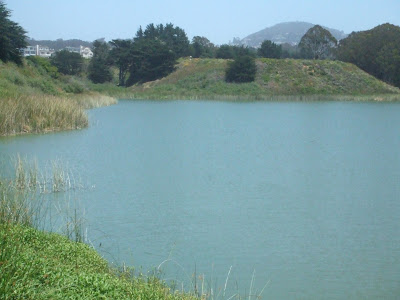 I digress. There are lengths of narrow strips of habitat at Lake Merced, and some wider bits as well. The steep lake walls now support vegetation following drastic reductions in water levels. Like much of SF, the soil is sand, particularly on these dried out lake walls. Thus getting down to the willow stands often involved a lot of sliding. Getting back to the top, flat areas of the park can be like climbing sand dunes with slopes up to 38 degrees, dotted with poison oak in some locations. Most people don't go into these areas, which is great for the birds who call the lake home for all or part of the year. Dense stands of scrub, dominated by willow or coyote bush, provide excellent nesting habitat for scores of avian species.

I mentioned the cormorant rookery in a previous post, which is found not in the scrub but in a stand of invasive eucalyptus trees. It's an amazing sight to enjoy in a city. I counted 26 adult cormorants and two herons in this stand on Wednesday. 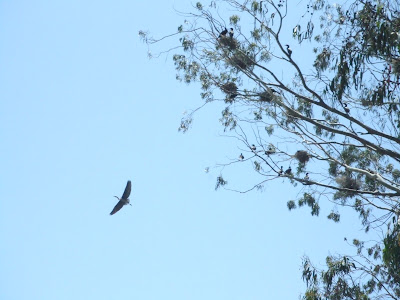 In this pic you can see a heron flying away, several adult cormorants and their nests. The herons seemed a bit off, I don't understand why they were kicking it with the cormorants, often displaying their wings and generally distressing the cormorants. Maybe they eat baby birds or eggs. I dunno. Maybe I was misinterpreting the whole thing.

I was a bit surprised by the results of my research at Lake Merced. Overall floral diversity is low in willow scrub. I knew that. I saw that in Glen Canyon. But it's really low at Lake Merced. I suppose part of that is because the willows have moved so much with shifting lake levels. Very low floral diversity, but very high avian diversity. So many variables. Urban habitat is confounding. I'm worried about writing up this research. For now I'm going to tinker with some maps.
Posted by rachel kesel at 12:02 PM