Cellphone Free (For the Moment)

My ancient phone broke last week. I held onto it when I left for London last summer, brought it back out for use at the SF airport to call my housemate about getting in the flat. My sister gave me that phone. Sometimes I had to pull the antennae out with my teeth for an adjustment to get it to work. I was stoked that it still worked when I landed. Some numbers were outdated. For example, I gave two people the number for a mutual friend only to discover that, in fact, I was giving out the number to the Presidio YMCA. Oops.

Now the phone is officially dead. I briefly missed it as an alarm clock. Then I remembered that my handy dandy anonemeter (wind meter) also serves as a piercing wake up call. I can check the time on my GPS or the ipod that my clients gave me last year. The darn phone never did tell me interesting things like elevation, slope angle, or compass bearing like the rest of the gadgets weighing me down these days. One less thing in my pocket.

As I've taken my time telling people that I'm back in SF, I felt no rush to tell people that my phone broke. I thought I'd get another one off Craigslist pretty quickly. I have not. I went to my (evil) service provider's shop to see if they had refurbished phones. Nope. Only online if you sign up for a 2 year contract. Umm, no thank you. Wow do I miss the European cellphone systems, where pay as you go is affordable and you only pay if you're the one making the call.

Busy with the vegetation survey, I have little time to arrange to get a new, used phone. I'm pretty tired when I leave whatever park I'm working. And I might have gotten a bit too social for a second, so I'm really trying to focus right now. Thus phone free life is kinda nice.

Or it was. Until this morning when a man got weird with me on Twin Peaks. I felt a bit intimidated and wished I had a phone. Then I wished that I hadn't wished I had a phone. I wished that people were more optimistic and kind. Later I wished that when I told the man about my work, which he perceived as inconveniencing him, that he appreciated my love of the land and commitment to conserving its integrity. But in that (rare) moment when I felt intimidated by his exasperation, I wished for a phone.

But I'm not searching Craigslist tonight for a phone. I swear they're all new on CL these days. What's up with that, anyway? I'm content for the moment to not have a phone. Removed from the weirdness, I'm confident that the guy was ok. For sure he was reluctant to descend that 35 degree slope to reach me and only got within shouting distance.

Whatever. Besides being intimidated, the other rarity today was the sighting of a rabbit in San Francisco. Apparently we used to have plenty. Local naturalist and habitat restoration guru, Jake Sigg, told me that he used to see them in Golden Gate Park, but that they've become quite rare, with people occasionally seeing them on Twin Peaks. I saw a sweet little bunny while biking on the east side of the hills, just coming around the south peak around 9:30 AM. I thought fondly of Louis Rex, the rabbit that I lived with in London. Granted Louis is way bigger than this little brush rabbit, who I scared half to death. Damn I wanted a picture of that furry butt crawling into the coyote bush (Baccharis pilularis). But no dice. I'm so slow and poor with the photo taking. A nice (used, of course) camera may be something I invest in if my life as an outdoorsperson is to continue.

I'll write more about Twin Peaks soon, much in the same fashion as Bayview and Glen Canyon. 'Til then, enjoy these pictures from a sunny day up there. 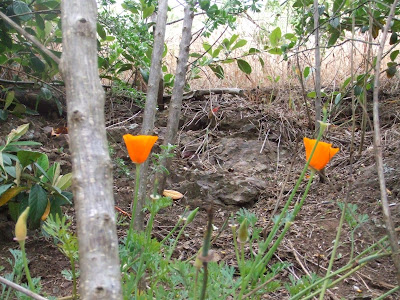 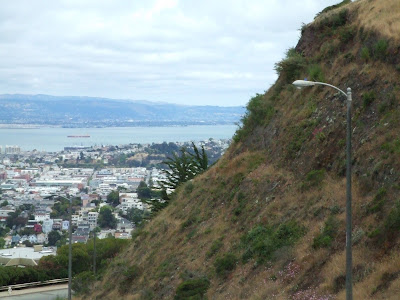 View to the bay on Burnett. This sharp slope evidences human intervention for a road cut. Researching the history of my four parks (Bayview, Glen Canyon, Twin Peaks, and Lake Merced), I'm learning a lot about road cuts and other excavations for home construction. 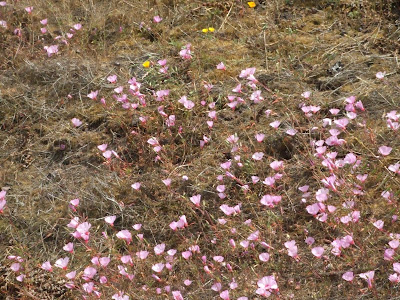 Farewell-to-Spring (Clarkia rubicunda) on the bottom of that same sharp slope, demonstrating that nature and beauty cling to that which we leave it.
Posted by rachel kesel at 4:49 PM

If you decide you want one, I have a LG phone that I no longer use. The battery doesn't last very long any more and should probably be replaced, but other than that it works perfectly.

Let me know if you want it and I can bring it with me when I pick up some of that plum jam... :)