Rivers Dying in the US 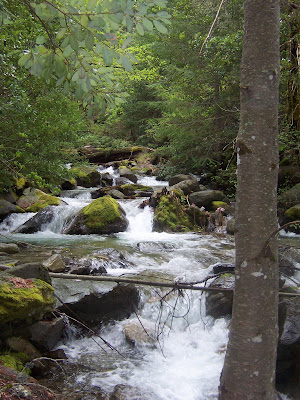 As a Californian, I write about water a lot, particularly after taking an illuminating course on water resources in my undergrad. I'm currently writing a paper on wetlands for my master's (or doing anything but writing about wetlands more precisely). Most Americans can live for weeks without food but only a day or two without water. It's a crucial element of life, like most of the services provided by our planet.

I just read this article about dying rivers in the States. Given rampant spray-head irrigation in the dry, hot Central Valley, I felt no surprise at the listing of the Sacto-San Joaquin system as number one. As California faces water rationing, I'm really hoping that changes are forced on agriculture, including the curtailing of land and water for irrigated pasture and alfalfa for beef production. We can force those changes with consumer choices. If you're in California or buying California agricultural products, remember that one serving of beef uses about 2,000 gallons of water to produce. You can acquire the same amount of protein and nutrition using far less water through other California crops. Eating lower on the food chain can help these rivers.

Right now, the San Francisco Chronicle has a 'game' on its website where you can 'choose who gets water'. But it's not quite true. You can adjust the percentages of water only to the current distribution levels! I thought that I would be able to lower the flow for agriculture and get some analysis of what we might lose, but it's not that sort of a 'game'.

While the destruction of California's rivers is no longer surprising, I wasn't expecting to see Flint River as number two on the list. I grew up just a couple of miles from the head of the Flint River. That Georgia is stupidly retracing California's steps in water supply mistakes by trying to dam is pathetically shortsighted and a stopgap destined to fail. Current research and global trends shows that the era of dams is over. It's time to decommission dams, not build them. Georgia wasn't prepared for the population explosion, allowing developers to carve up and subdivide my home state with impunity. Increasing supply will encourage more growth and waste. Instead, Receiving over 40 inches a year, Georgia needs to find a way to sustainably harvest some of it's rainwater.Increasing efficiency can also take up a lot of the slack in supply shortages, if not all. And again, agriculture accounts for over 55% of water use in Georgia.

We've seen these same problems in California. It's time for other states and government entities to learn from the water mistakes of the west. And though most water is dedicated to agriculture in the States, that doesn't relieve the individual from her responsibility. Many of our responsibilities now lie in our consumer choices and our willingness to step up and defend threatened resources. To learn more about water resources in Georgia, you might check out the Georgia Water Coalition. For California, I like to get my water info from the Department of Water Resources.
Posted by rachel kesel at 2:52 AM