I got back from the Tenerife field study at 6pm on Wednesday and went straight to the Library House for the weekly cafe, where we were showing films about globalization and poverty. I walked into a room full of friends offering hot food, smiles, and updates. After a draining day of fear and medication - I'm a terribly anxious flyer - I couldn't have asked for more. We watched "We", which is a bit of a visual essay to accompany a speech by Arundhati Roy. I fully recommend it if you haven't seen it.

In absolutely fabulous news, the next court date for the Library House is not until May 13th! We're stoked to have so much time to prepare our defense of the social centre. It's great to know we can stay in the space through the spring and possibly into the summer. The garden is being planted and the place is beginning to take on a whole new character as we emerge from a dark London winter. Another squatted social centre in London, RampART, nearly faced illegal eviction yesterday. But the space was secured from the inside and remains to organize for another day. (And hopefully for many more). 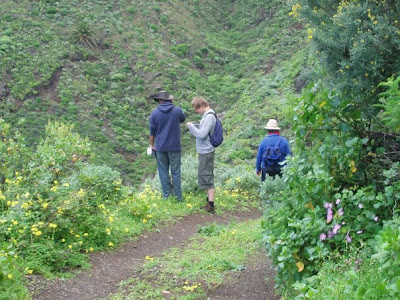 So yeah, I dropped out of the sky after a week of doing plant ID across a rural park (Anaga, if you're familiar with Tenerife) on a subtropical island. This morning I was supposed to head to Bristol for a fun gathering of activists, but when I woke up I was dragging, super tired. I spent £15 on a bus ticket but I'm going to have to miss this one. 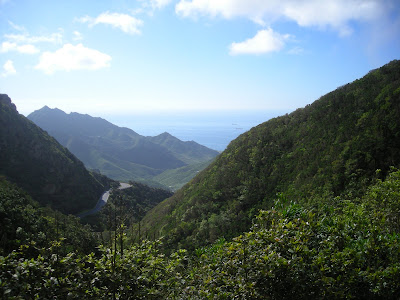 Stepping back in space and time, the trip to Tenerife brought pleasure and some pain. I learned a lot, but not at all what I thought. I had no idea that I would spend four days doing 5m X 5m plots along road sides. I thought we might actually discuss the concept of managing nature, which is what the module is titled. But what we really did was drive around and get samples biased to roadside invaders for a data set that has no relevance other than to our projects. In general, I value obtaining my own data. I have loathed the projects where we're given some meaningless data set with which to tinker. So I truly appreciate the field work and the opportunity to create a data set. But it's not necessary to go so far to do that work.

Tenerife is beautiful once you get above the tourist line, away from the developments, away from the scars of progress. My perceptions of the coast are muddled by lines of nurdles resting on black sand, tracing the paths of warm Atlantic waves. Despite obvious pollution and debris, I swam under the full moon because it seems we're going to have to do it anyway if we want to enjoy the sea. 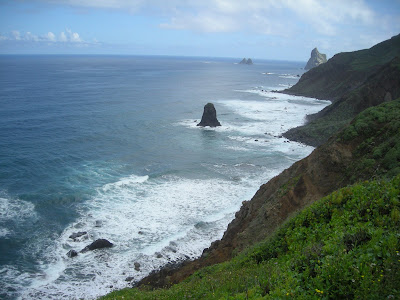 Above the coast a tangle of roads fragment vegetation and communities to expedite tourist movement. Rising out of the urban areas, you might find yourself in the Corona Forestal, Teide, or Anaga Rural Park. These spots are amazingly beautiful. Snow greeted us on Teide, where we saw aridiphilic vegetation surrounded by white in the weirdest mishmash of elevation and precipitation that I've ever witnessed. Endemics abound, as do invasives. It's an interesting struggle among the vegetation in terms of competition for space. I wish we'd gotten the hell off the the roadside so that we could see what the realities are like within Anaga. Gradient, time, and copious cactae kept us largely along roadsides.

At least two of us wanted to hike a transect across the park, camping rather than driving back to a pretentious hotel every night. I can see how that's wholly impractical with 25 students as backcountry space for one tent is often difficult to find if you have any ethics about it. But perhaps this is just another reason to select somewhere other than Tenerife for this field trip.

But for now I'm in London, tired and thinking of all of the work I have to do. I still need to settle on a project for my dissertation. I heard from one USGS researcher last week saying that he didn't know what projects they would be putting forward because the federal budget hadn't been passed. I started romanticizing San Francisco again, but after a truly annoying email from a friend (about parks and mountain bikes), I suddenly remember why I left. And I'm not sure that I want to go back just yet. It's not a bad option, but probably not my favorite.

Whatever, I'll make the best of it wherever I end up this summer.
Posted by rachel kesel at 2:57 AM