I fled London on Tuesday afternoon via a train from Paddington Station. I was lazily making my way toward my train when Rose from my UCL course tapped me on the shoulder. Unbelievably, we were taking the same train west outta town. We actually didn't get to sit together much because she didn't have a seat but it was a nice way to start the journey to Cornwall.

The trains were flakey but I made it to Truro, where Max and her dog Ester greeted me. We drove down to Max and Ashley's place in Penryn. Upon my arrival, United Statesians outnumbered Brits in a show of 3 to 2. I'm not counting Ester as dogs, being generally wiser than humans, place no emphasis on nationality, just on where you piss daily. Max's brother, Adam, came to Cornwall, as did Madigan (aka Bonfire Madigan ). So we have familial British traditions and three Americans who've never had Christmas in the UK. Madigan's just touring here but Ashley and I are recent-ish transplants with a fair bit of homesickness with which to contend.

As a final 'gift' from 2008, my illness became resurgent on Tuesday and I spent most of Christmas eve in a daze. I've had so little voice that talking to people on the phone is torturous, abbreviating my holiday conversations with the fam back home. But on Christmas Day I couldn't be deterred from a trip to a Cornish, neolithic, stone circle, where we drank hot toddies and played with Ester. We dashed off to cliffs over the Atlantic, where Max pointed and stated calmly, "America, is over there". I dissolved into a fit of coughing giggles and somehow fought the urge to dive off the cliffs toward my homeland.

From my limited experience, I think Max and Adam provided a thoroughly British Christmas. Our dinner conversations were probably not very traditional but the food was nearly all Cornwallian in origin and entirely weird, but delicious, to me. Though the parsnips, chestnuts, butternut, and such were great, I have to focus on the Christmas pudding. They set that thing on fire. I was nervous all day as the thing steamed in a tupperware of boiling water. Then they turned it over and set it on fire. It burns because it's about 7% alcohol. Apparently the fruit can be steeped in alcohol for up to a year in advance. Then we put FOUR types of toppings on it. Five if you count the fire, really. We used hot custard, single cream, clotting cream, and brandy butter - yep, more alcohol. Seriously.

Besides the food, I've learned a new game, called Mystic Wood. It's permeated our conversations and in my oxygen deprived coughing fits, I sometimes think I'm a knight called Britomart. I'm currently contemplating a Mystic Wood tattoo, but the options are so outrageous that I'm not sure I can narrow it down. We played the extended edition, forcing us to append a long slice of cardboard to the table just to fit the board upon it. What is Christmas without some game induced rivalry? Dare I mention Trivial Pursuit, SF?

Today we explored beaches and graveyards and debated the way Brits and UStatsians relate to the term "charity". I coughed some more and had a bit more voice than yesterday. Still not enough to do the BBC interview tomorrow morning unfortunately! ('cause what I really want is to be on the radio soundin' like a dyin' frog suffering frequent bouts of desparate lung failure.)

Tomorrow everything changes. Max and Ashley are heading to Turkey in an effort to evade the grey of England. Madigan begins a long journey back to SF. And Adam returns to Bath. I'm staying here with just Ester, the dog, for ten long days. I know zero humans in Penryn. I might freak out at some point. But for the moment I'm hoping to get well enough for bike rides to the beach and long walks with the dog. I've got some major paper writing to finish. And at some point I'm sure I'll be distraught with loneliness, but for now my heart is full of the laughter that's filled the past few days. Unapologetically queer, radical, and American, Ashely and Madigan have sort of hit refresh on my identity. Adam's a breath of fresh air and the man makes a damn fine custard. Max, an ER nurse and British queer activist, has been a total rock since I came to this country and Christmas was no exception. Not only did she give me the dykiest keychain multi-tool for Christmas, but she's also given me an inhaler! With friends like these, I feel pretty grounded in this moment. 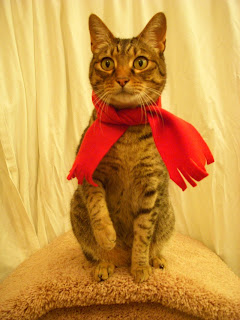 And when I do get lonely, I'll reread all the sweet emails i've gotten over the past few days. I'll mistily gaze at the pix of Quivus and Zalaazil that my good friend, Brandy, sent me yesterday (Zalaazil to the left, Quivus below). I'll re-read Hunter's zine on the border and ponder a dissertation. And eventually I'll call some friends in London and beg them again to come down here and spend some time with me. I'm sure I can convince one of them! 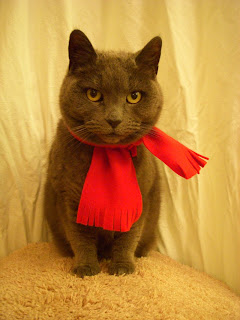 Those kittie pictures are freakin' awesome! much love and psychic luck for getting your writing done. I've got a similar mountain to climb now that I am back in LA.

Happy New Year, Rachel. Just a little belated good wishes for 2009 from your friend from 2008. Did you see what you helped create for the new year? http://vault.sportsillustrated.cnn.com/vault/article/magazine/MAG1150095/index.htm Check me and my mom out in the photo gallery http://sportsillustrated.cnn.com/multimedia/photo_gallery/0812/nfl.michael.vicks.dogs/content.1.html Because of your help I am big and brave and a really good model. Thank you.
hugs,
Uba