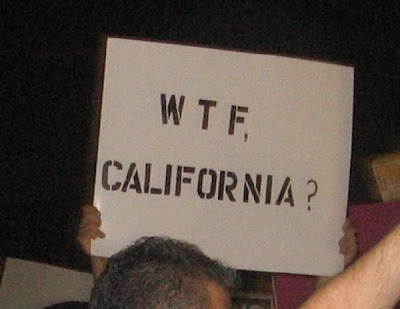 I said I'd save my Californian disappointment for another day. Well, that day has arrived. California's Proposition 8 asked voters to vote yes or no on the following question: Shall the California Constitution be changed to eliminate the right of same-sex couples to marry providing that only marriage between a man and a woman is valid or recognized in California?

52% of California voters chose to approve this measure, thus writing discrimination into our state constitution.

This Saturday there will be demonstrations in San Francisco and across California supporting the repeal of Prop 8. Repurpose some cardboard to make a clever sign and join in the fight for equality under the law. Apparently there will be demos across the country as well. Smash Prop 8!
I know that a lot of people like the ability to legislate through the ballot box, but I personally find the initiative process a perversion of democracy. I've been a detractor for years, not just since Prop H8, as it's become known. Democracy does not mean majority rule. In fact, we have safeguards, such as 2 senators per state and super-majority rules for changing constitutions, to ensure that the majority does not take away the liberties of the minority. 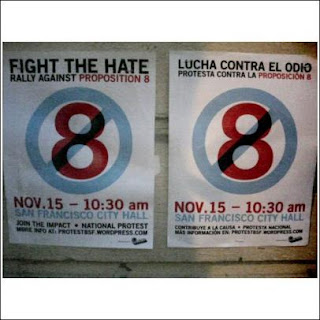 Unfortunately, the initiative process can be used to take away the rights of the minority. And the initiative process requires a highly informed electorate, something we rarely have. I voted on 12 state propositions and 22 San Francisco propositions, plus supervisor, college board, school board, BART board, Congress, local judge, and president. How many people actually do the level of research required to vote intelligently on all of these issues? Not many, I'm guessing.

I realize that it doesn't take a super-informed person to know the difference between right and wrong on the Prop H8 decision. It's one of those issues that I frankly think belongs with the courts, who made a well reasoned decision last spring.

But there are other issues, such as clean energy, that come before us in the initiative, rather than in front of legislators who can negotiate. Once we vote on something like gas tax, "the people have spoken" and it ties the hands of those elected to draft and modify our laws. Initiatives make it more difficult to pass intelligent laws, often binding the state to weird budgets, percent spending, or other parameters. Once the initiative has enough signatures, it's put on the ballot and set in stone. No more room for negotiation, leaving voters with bad choices between passing a law they don't really like or not addressing some issues, like public power, at all.

Prop 8 has really caused a resurgence in my antipathy toward the initiative process. Maybe I'm just super pissed that I can't be involved in any of the demo's this weekend.

If you're wondering what this has to do with not shopping or sustainability, I'll make some tangential connections for you.

First, this writes the religious views of the majority into our state constitution. Our laws separating church and state are clearly meant to protect the minority from the tyranny of the majority. This precedent gives fodder to other religious intrusions into our laws. Fundamentalist interpretations of religion are often used against science and in favor of the "man over nature" paradigm that has arguably gotten us into the ecological messes we're currently trying to offset, clean up, or reverse.

Anecdotally, conservation and environmental fields are pretty gay in my experience. So how 'bout some rights, California? Treat us equally so we can get back to saving your asses from climate change, vapid consumption, and the monotony of a species-poor-planet. Our co-workers miss our focus. Maybe you can focus your morality on your personal consumption of the resources god gave you. And I can go back to focusing on how best to conserve them.