More Freecycle and Being in Britain on US Election Day

This morning I snagged a toasty blanket from a local Freecycler, bringing my bed to a state of cozy warmth. Susannah gave me the blanket and some tips on cycling routes through the neighborhood. I like how locals here are actually interested in helping new folks. And many locals are well versed in the neighborhoods because they've actually lived in London their whole lives. Unlike San Francisco, where there's bitter, supremacist tension between SF "natives" and transplants, London has a blend of born and raised Londoners and more recent arrivals. There's less overt competition between the two groups, maybe because London's more liveable for families than SF. What do I know, though? I've been here a short time and have no kids, but the presence of so many families makes me think it's just more feasible to raise a family here than in somewhat barren SF. (More dogs than kids ... though that trend is reversing in 'hoods like Maternal Heights and Stroller Valley).

As a newcomer I see less competition between Londoners and recent arrivals. And less competition between myself and other new arrivals. In SF there's a bit of snobbery around learning the city's ins and outs, like there's some right of passage in figuring out that some burritos are inedible and that huge hills can be avoided when traveling through neighborhoods. Maybe people here just realize that the clouds, cold, rain, crappy food, circuitous streets, and constants car traffic are so oppressive as to drive a recent transplant insane if little pieces of life don't fall together. Maybe London's just older and more accustomed to temporary visitors than a relatively young city like SF. Anyway, London's less snobby than SF on some fronts, though certainly not all (attire, table "manners", and societal hierarchies all gross me out here).

My Freecycle experiences have been great so far. Susannah encouraged me to say hi if we run into each other in the neighborhood. And she didn't let me leave without asking if I had voted today. I loved it. Too funny. People here really do care about our U.S. election, even if they don't want to admit it, and some of them definitely don't. My new Freecycle friend had her fingers crossed for Obama.

I guess I've been so panicked about my own situation here that I've forgotten to write about the election. I'm not huge on our weak democracy and I'm not much of a reformer. But I do vote, and I hope that you do, too. I take whatever means afforded to me to affect change where I can.

With 22 propositions on the SF ballot, 12 on the state ballot, a supervisorial election, and the forgone conclusion of a Pelosi victory, today's election results will be bittersweet for many of us. Maybe farm animals will get better conditions, but maybe we'll write discrimination into our state constitution. Maybe my choice for D11 supervisor (Avalos - then Knox, then Ramos: go IRV) will get elected, but PG$E will crush public power again. Grrrrr, I hate the initiative process. I know to some it seems like democracy at it's finest, but with our relatively tuned out electorate, it's just a huge fundraising clusterfuck. Like most races, the props generally go to the side with the most money for tree-killing propaganda. Did I mention grrrrrrrr?

Last week on the field study, a couple of people got bent out of shape because they missed a football game that took place during a lecture. I kinda feel like I'm missing out on my favorite contact sport, being so far from the action. It's like having to go to bed on Christmas when you're a kid: Will I wake up to lumps of coal (and off-shore oil rigs) or a stocking stuffed with public power, space for farm animals, and my rights intact? Dunno!

Below are pix of my Freecycle finds and the view out my window, in case you're interested. 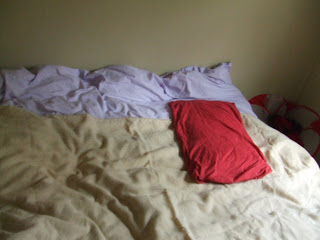 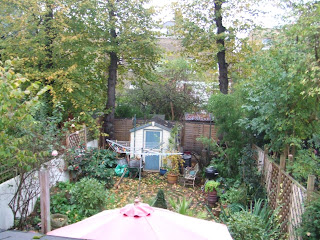 I'm new to the compact, so why can't you reuse yogurt containers? It confused me, because another blogger stated that he was holding onto a plastic bag! Pls educate me.

This site is the best. I'm learning how to give up my ignorant ways for recycling, social consciousness raising and how to create a more nurturing community. I won't shop on Friday and will keep trying my best to 'use it up, wear it out, give it away or do without.' We can feed and clothe the world without taking needs away from ourselves. To think otherwise is to buy into the lies that we have all been told which keep us in fear and in line. If everyone would just focus on the other's well being, instead of their own, what a wonderful world this would be.

regarding the plastic bag, that's my joke about being sentimental about things i brought from the states to london. i was also a dog walker in the states, so i used plastic bags for picking up poop about 10 times a day usually.