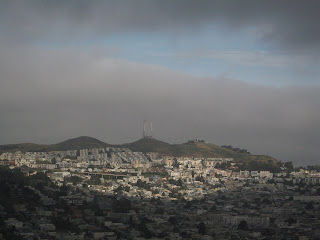 This is Twin Peaks on many typical SF days, enshrined in fog. I'm working up there in Mission Blue Butterfly habitat, but these are not normal SF days: It's truly hot. Wtf? As in Where's The Fog???? I actually had to come down early today because my water got so hot that it wasn't helping regulate my temperature, even when I poured it on my neck and wrists. Crazy.
But there can be no rest for the weeders, as this heat means that the seed of my target species, invasive radish and mustard, are drying out fast and falling. I have to proceed strategically, southern slopes of highly diverse areas first. Miss. Blue habitat areas take precedence over the rest.

Have you met this endangered creature, who calls San Francisco home? Listed through the Endangered Species Act in 1976, the Mission Blue Butterfly relies on lupine as its larval food plant. Mustard and radish encroach on the grasslands of Twin Peaks, one fragment of habitat that Miss. Blue and her lupines continue to call home.

Mustard and radish are invasive, damn near the opposite of endangered. Garden varieties reverted to wilder states, these plants lack natural limits in this environment. As they spread, the diversity of plant life and ecosystem function decline. Insects, birds, reptiles, and mammals all need habitats that offer variety in their structure (height, density, texture, durability). If a wave of mustard, french broom, cape ivy, eucalyptus, oxalis, radish, or ehrharta washes over a landscape, we often end up with one species dominating an area formerly shared by several species. With a decline in plant diversity, you can expect a decline in animal diversity. Some species can make use of invasive plants, but others cannot.

Since invasives have a leg up (or maybe a leaf), someone has to help out the indigenous species. That's what I do. I don't water or prune plants. I just keep space available for local species. Sometimes I get to collect their seed, help raise them in a nursery, and plant them to reclaim space. But mostly I weed.
Posted by rachel kesel at 7:31 PM