Compact the War: End It 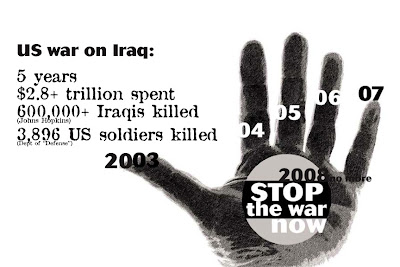 The war turns five years old next week, and wow has it been an ecological and humanitarian nightmare. Straight up: War is not a Compact friendly endeavor. Bombs are not realistically recyclable. Cycles of destruction and reconstruction are not sustainable. Plundering a fragile desert ecosystem, such as the Tigris and Euphrates valley, one of the oldest havens of human life on the planet, is shameful and repellent.

But Americans know this and the overwhelming majority wants to end the war. According to data from the U.S. OMB, our government has spent over $2.8 trillion on the military since 2003. In California we're closing over 40 state parks because we have a massive budget shortfall. In San Francisco our parks are severely understaffed because of a hiring freeze imposed because of budget woes. We need climate change solutions now if we wish to protect the breadth of biodiversity currently gracing Earth.

What would you do with 2.8 trillion dollars?

With the war celebrating its fifth bloody birthday, what will those of us who oppose it do to stop it? Actions are cropping up all over the country and you still have time to plug in if you'd like. You might be able to find something local here.

In San Francisco, I'll be supporting actions organized by Direct Action to Stop the War. When I say that I support these actions, I am not suggesting that people break the law. I only encourage you to exercise your First Amendment rights to their fullest extent.

On Saturday, March 15th, there is a rally, march, and direct action planned at the Chevr0n refinery in Richmond, California. Chevr0n refines about 1 million barrels of Iraqi oil each month in Richmond. Chevr0n has also pushed for the privatization of the Iraqi people's oil, in no small part by pushing the Iraq Oil (Theft) Law. The refinery is an environmental justice catastrophe for the people of Richmond and the Bay Area. With spoils of the Iraq War, Chevr0n is trying to expand and retool its Richmond refinery to allow the processing of dirtier crude oil. Richmond residents are fed up. This is an action about communities, climate change, and war.

On Wednesday March 19th, the 5th anniversary of the Iraq War, there will be a decentralized day of action in downtown San Francisco. On March 20th of 2003, we took to the streets of San Francisco to express our rage as Baghdad burned under the fires of Operation Shock and Awe. On March 19th we will take our frustrations to the corporate profiteers and responsible government agencies that allow this war to continue. We will confront the companies receiving fat contracts at the expense of our parks, schools, and health care. It's also time to remind complicit government officials that they defy the will of the people in allowing the continuation of death and destruction in Iraq.

Direct Action to Stop the War (DASW) is a decentralized, unaffiliated network of Bay Area affinity groups and individuals. DASW is calling for nonviolent direct action and asking that individuals and affinity groups respect the tone of the various actions that will take place on March 19th.
Posted by rachel kesel at 9:33 AM