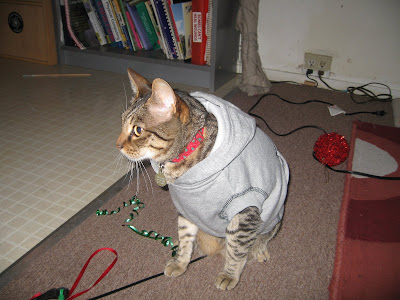 At times I've been accused of sweating the small stuff, obsessing over minutia. Being a bit type A, I'm detail oriented, or that's my version of it. So if I obsess a bit over whether or not I should buy barrettes, it's because I figure that while they're only a small bit for my hair, workers somewhere have a lot more invested in them than I do.

Usually I can live w/o the little stuff. Then there's the litterbox scoop. I've had the same one for about 5 years. I guess while I was house sitting there was some sort of natural disaster in the box that caused the scoop to break, 'cause when I came home on Sunday the house smelled a bit and the scoop was in 2 pieces.

Turns out my cats hate the Compact. They've guilted me into buying them toys once or twice, forced me to buy a larger, second litter box (which did enable our transition to biodegradable litter), and caused me to consider stock prices for Nature's Miracle. But, that sweater was passed on by a client so don't think I've gone to dressing up Zalaazil for kicks. (but we don't have heat and he loves his warm hoodie)

So early Monday I put about 2 minutes of thought into ways of living w/o a litterbox scoop, improvising a new one, or finding a used one. Then I thought, "fuck that" and bought a new one at my local critter supply shop.

The thought of using toilet paper or plastic bags to remove litter and feces wasn't pleasant, in no small part because I knew it would mean less diligence in box cleaning. Try as I might, I couldn't think of a new scoop device that would work on both boxes (which have 2 different litter types, hurray for choosy cats). And the thought of a used poop scoop seemed doable, but I was more concerned about the need to scoop the box asap.
Posted by rachel kesel at 10:10 AM 9 comments:

Sorry for the Lack of Posts, I've Been at the Mall

Just kidding. Though I did go to the mall once between the last post and this one. It was really really funny. My roommate (not a compactor) wanted water proof boots and I wanted a battery for my laptop. Make what you will of that. I can't find a used battery and am not sure I'd want one if I found one. I find I'm more lenient with things that I use for work than personal stuff.
http://www.blogger.com/img/gl.link.gif
So it's the mall. The mall has everything right? Wrong. My laptop's so old that I have to order a battery from Apple. And you cannot find waterproof shoes at the mall. Well fuck us for being so functional.

Other than a 10 minute mall outing, I've been trying to find funds for grad school. The situation's getting desperate! Don't be surprised to see a paypal button on the right of this blog some day. Ha!

And lastly I've been working on actions marking the fifth anniversary of the Iraq War.

I can't believe I even found 10 minutes to go to the mall!
Posted by rachel kesel at 6:41 PM 5 comments:

Isn't the gifting over? I'm sure that's what you're thinking. But tomorrow John Perry and I are going to be chatting with the Inforum crowd of the Commonwealth Club. After we defend our decisions to purchase new underwear and detail what we've learned, there will be a reception.

We're going to trade environmental services as we did with the project that got me involved with the Compact just before it launched. Back then I called it Kyoto Christmas, but let's face it, Kyoto's a bit of a failure. So I've renamed it Cap'n'Trade Gift Exchange.

Given that I don't really like the Cap and Trade system, I kind of like this project as a means of making fun of pollution and carbon credits in way that's enjoyable and light hearted. It also forces me to reconsider the need for incentives in reducing our ecological footprints.

There will be a matrix for folks to sign up on. Like the Compact, it's a personal challenge. No one's going to come to your home and turn off your tap if you don't achieve your goal.

Someone kindly posted a direct link to the Minneapolis Star Tribune article. I was surprised to find that it lacked a lot of the topics that folks were emailing me about. Then someone pointed out that the first blog post mentions some of that stuff. It's been such a long time since that was posted, that I'd forgotten. Also easy to forget it because I didn't write it.

Again, craft your own rules or exceptions. Be forgiving when you slip. Enjoy the challenge, it's fun or we wouldn't still be doing it.
Posted by rachel kesel at 3:33 PM 2 comments:

Wow, people really got into that Minneapolis Star Tribune article. Funny, none of us SF Compacters has seen it because it's a subscription paper. Don't worry, reading about yourself is weird so we're pretty cool with it.

I got some interesting comments on the last post. Check out www.art-marron.com when you get a chance. I can't read French, but the images speak for themselves and they're quite inspiring. I appreciate being sent that link because it's so rewarding to know about artistic and social movements in other places. I continue to write this blog mostly because I'm contacted by people who express solidarity and interest. It's great to learn about how other people address consumption or related issues such as ecological or economic injustice.

Again, if you're new to the Compact, the guidelines that we set were highly personal. So, if you're like Angela, who likes her underwear on the fancy side, then ignore our insistence upon utilitarian drawers. Small indulgences often make it possible to make big changes in your habits and ecological footprint.

Today I indulged an old consumptive habit of my own. I took a short trip up to John and Rob's cabin in Cazadero with 4 friends and Charlie the Cairn terrier(in a borrowed hybrid car). Charlie's missing his momma, who's out of town for 2 weeks. So he's got a belly ache and needs a lot of love. [note that I'm justifying before I even tell you what I bought] I used to buy a lot of cat toys, but that stopped with the Compact. I've broken down once to get $4 of cat toys, and today I bought a stuffed animal with a squeaker for Charlie. He really likes the squeaker or I'd have gotten him a toy from a thrift store. Generally I would have bought him a rawhide or something, but his belly's a mess so no food love. He loves it and I'm happy I did it. He's gettin' older and it brought us both some joy.

John and I will be at the Commonwealth Club on Tuesday. It's a good opportunity and I'm excited about the format. I've been passing radio interviews along to John and Kate all week because I'm pretty bad at them. My brain is foggy when I'm on a telephone. I've always enjoyed talking to reporters face to face a bit better. But with the Commonwealth Club, you can see your audience and get questions from them on the spot.
Posted by rachel kesel at 9:47 PM 2 comments:

I guess someone did an article with the Minneapolis Star Tribune that came out today. I'm getting lots of emails about tangential aspects of the Compact.

First, I didn't do that article so I'm not sure how botox and viagra came up (pardon the pun). But regarding botox, I don't even like the idea of buying makeup (I don't personally, ever), so I'll never be down with botox. Getting products, which is exactly what botox and viagra are, to market requires tons of testing. It's super consumptive and most imporyantly to me, it involves harming loads of animals. Not a single human's crow's feet are worth the suffering of a mouse, rabbit, dog, or monkey. Regarding viagra, erectile dysfunction doesn't really apply to me. I'm a mostly queer girl in her twenties. Maybe I'll care some day, but I don't right now.

In general, our society is way over medicated. I don't support that and would point to other societies who live without botox and viagra. It's not like we're suffering a population decline because of erectile dysfunction or crow's feet.

And for pajamas for kids, I don't have kids. That wasn't my exception. But it gets to the heart of the Compact: This is a highly individual challenge. We didn't initiate it to attract adherents but that's what happened. Take our experiences and make them relevant to your life. You know your own threshold. If new shoes (sweatshop free and vegan to keep it real) make life with other used items more palatable, then get them.

The Compact is a non-hierarchical association of folks concerned about over-consumption. We never try to dictate your motivations or your actions. We share our own experiences to encourage folks to consider alternatives to consumer and corporate culture. I'm stoked that so many folks can relate to us and our challenge. But don't be deterred if you don't agree with everything that you read about us.
Posted by rachel kesel at 1:33 PM 7 comments: