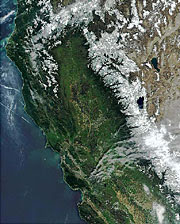 From the SF Public Utilities Commission:
"Following the fourth driest winter on record and concerned about possible first year drought conditions, the San Francisco Public Utilities Commission (SFPUC) today urged its 2.4 million San Francisco and Bay Area customers to curtail water consumption in the coming months to help avert possible mandatory rationing and deeper water consumption limits later this year. According to the latest measures, March precipitation at the Hetch Hetchy reservoir was just 27% of normal and the Sierra snowpack in the region is at just 46% of normal for the season."


And Colin Beavan was on the Colbert Report.
Posted by rachel kesel at 6:59 PM

I just think you're the best, Rachel. Just had to say that.
Colin aka No Impact Man

How ironic. I spent Easter in San Francisco. Every morning, the sidewalks near my hotel were hosed down. Being from Wyoming where water is precious, I found myself commenting every morning about what a waste of water it was, hosing down the sidewalk.

Rachel, Thank you for some very enlightening material. I am an old "revolutionary" from the 60's. How good to know that the revolution to make the world a better place still exists among the young. Ann


Are their any neighborhood association in the Mclaren Park / Bernt's Knoll area?